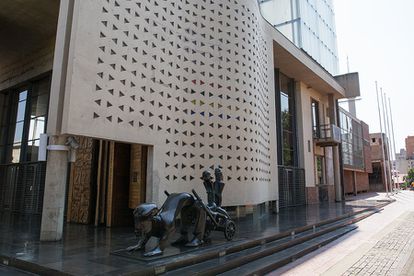 The Constitutional Court has upheld a decision that people born in SA to foreign parents can apply for citizenship.
Photo: Ashraf Hendricks

The Constitutional Court has upheld a decision that people born in SA to foreign parents can apply for citizenship.
Photo: Ashraf Hendricks

The Constitutional Court has upheld the constitutionality of provisions of the Refugees Act that ban individuals who have committed serious crimes from being eligible for refugee status. In doing so however, the Court has added important procedural safeguards to such people and also highlighted how their fundamental rights can still be protected even without obtaining refugee status.

The case concerns an application for refugee status made by Dobrosav Gavric, a Serbian national who used to work as a police officer in Serbia.

In the 1990s, when Serbia was still a part of Yugoslavia, the country descended into civil war. Slobodan Milosevic, the former president of Serbia, employed a paramilitary unit known as Arkan Tigers, led by Zeljo Ražnatović, commonly known as Arkan. After the war ended, Arkan became a powerful politician and underworld figure who was linked to organised crime.

On 15 January 2000, Arkan and two of his bodyguards were assassinated in a hotel in Belgrade, Serbia. Gavric was present at the hotel when the assassination occurred and was seriously injured in the crossfire.

Gavric was subsequently arrested and charged with the murder of Arkan and his two bodyguards. On 9 October 2008, Gavric was convicted of murder and sentenced to 30 years imprisonment by a Serbian Court. Gavric was convicted in his absence and was not present for the proceedings. In 2012, he appealed his sentence to the European Court of Human Rights, but his appeal was dismissed.

In 2007, Gavric entered South Africa using a fake passport and name. The authorities only became aware of his real identity when he became the victim of a shooting incident in 2011. He was subsequently charged and arrested for possession of drugs and for fraud for using falsified documents. He was then detained in Helderstroom Correctional facility.

In January 2012, Gavric applied for refugee status on the basis that he feared being killed by Arkan’s supporters. However, the Refugee Office rejected his application. This was because the Refugees Act prohibits a person from being eligible for refugee status if there is reason to believe they have committed a serious crime that would be punishable by imprisonment if it were committed in South Africa. As Arkan had been convicted of murder, he was disqualified.

In the Constitutional Court

The Constitutional Court considered three main issues. First, whether the provisions of the Refugees Act, which prohibit a person who has committed a serious crime from being eligible for refugee status, are unconstitutional. Second, whether the Act entitles such a person whose application has been rejected to appeal that decision. Third, whether the decision of the Refugee Reception Officer should be set aside and if so whether Gavric should be granted refugee status.

Is the Act unconstitutional?

Gavric argued that the Act infringes his rights to dignity, life, equality and freedom and security. He argued that the Act was unconstitutional because it violated a key principle of refugee law which prohibits a person from being returned to a country where they are at risk of their rights being violated. Because Gavric feared being killed by Arkan’s supporters, returning him to Serbia would violate this principle.

The Constitutional Court pointed out however that international refugee laws include a similar prohibition to the one in the Refugees Act. The court explained the two main reasons for this prohibition:

“It protects refugee status from being abused by those who are undeserving; and it ensures that those who have committed serious crimes do not escape prosecution.”

Also, Gavric’s argument that the key principle of refugee law would be violated if he did not get refugee status was incorrect, the court said. Even if a person was not eligible for refugee status, they could apply to a court for their extradition to .

The Constitution prohibits the state from extraditing people who will be at risk of facing torture or the death penalty. Therefore, the question of whether Gavric should be returned to Serbia or not should be dealt with at the extradition stage and would have to be determined irrespective of his refugee status.

The court then had to decide whether the Act allows a person to have the decision reviewed when their application for refugee status has been rejected by a refugee reception officer because they have committed a serious crime.

Home Affairs argued that there is no internal review provided by the Act. The court rejected this approach. It pointed out that asylum seekers and refugees often have little knowledge of the law and its application involved complex questions. Also, there were potentially drastic consequences for a person whose application had been rejected, such a being at risk of persecution.

The court found that the Act must be interpreted in a way that protects the rights of refugees. The practical effect of this is that a person whose application has been rejected because they committed a serious crime may appeal that decision to the Refugee Appeal Board.

Should the decision of the Refugee Officer be set aside?

Gavric also challenged the decision of the refugee officer. The court agreed. It found that the officer provided insufficient reasons for his decision and that the decision was procedurally unfair.

Having set aside the refugee officer’s decision, the court considered Gavric’s application for refugee status afresh. The court had to determine whether the exclusion provision applied to him: Was there reason to believe he had committed a serious crime? And was the crime of a “non-political” nature?

The court pointed out that Gavric had flatly denied he had killed Arkan and his bodyguards. But without any evidence regarding the motive for the crime and related matters, the court could not apply the test properly. So it had to accept the evidence presented during Gavric’s trial, namely that the murder was primarily for monetary gain.

The court found that there was a “reasonable likelihood” that Gavric had indeed committed a crime because he had been convicted by both a lower court in Serbia as well as its Supreme Court. The court also found that on the facts before it there was no reason to believe that he had not received a fair trial in any of these proceedings.

The court therefore found that the exclusion provision applied and Gavric was not entitled to refugee status.

Why this case is important

A person whose refugee application has been rejected because they committed a serious crime still has the right to appeal that decision. Also, the court explained the link between extradition law and refugee law and how even without refugee status, a person’s rights to life and safety are still protected by the Constitution.