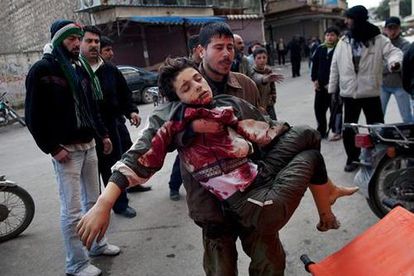 SOUTH AFRICA has opposed military strikes on Syria in an attempt to find a sustainable and diplomatic resolution to the civil war following an alleged chemical weapons attack.

Despite not officially being on the agenda, Syrian talks dominated the G20 summit in Russia last week, with US President Obama arguing for military action and Russian President Putin opposing the intervention.

Military strikes could plunge the region into deeper conflict and “detract” attention away from finding a diplomatic and sustainable solution, deputy minister of international relations and cooperation Ebrahim Ebrahim explained.

â€œWe are concerned that the use of chemical weapons, as deplorable as it is, will detract from the larger picture of finding a sustainable resolution to the conflict in Syria, which should remain the primary focus of the international community,” he said.

â€œSouth Africa does not believe that bombing the already suffering people and crumbling infrastructure of Syria, will contribute to a sustainable solution.

â€œMilitary intervention will serve no other purpose than hurting the possibility of a speedy diplomatic solution to the conflict,” he added.

The South African government is pushing for the Assad regime and rebels to engage in “all-inclusive national dialogue, free of any form of violence, intimidation or outside interference, in order to satisfy the legitimate democratic aspirations of the Syrian people,” Ebrahim said.

The debate over military intervention in Syria has intensified following an alleged chemical weapon attack in the region of Ghouta, in eastern Damascus on 21 August 2013.

Both sides of the conflict are blaming the other for the suspected sarin attack, yet increasing Western intelligence is saying it is â€œhighly likely” the Assad regime was responsible.

However, the Syrian government has said these claims are â€œfalse and completely baseless”.

Following the G20 summit, Putin claimed the attack was carried out by rebels who, relying on international intervention, were trying to â€œdiscredit” the government.

United Nations secretary-general Ban Ki-moon has announced that biomedical and environmental samples from the alleged attack sites have arrived at four laboratories in Europe. They will be tested for chemicals.

These results will be â€œpromptly” made available to the Security Council and all 193 UN Member States, Ban said.

Ebrahim said: â€œThe UN Inspectors are uniquely placed to independently establish the facts in an objective and impartial manner.”

The Syrian conflict has caused over 100,000 deaths, the displacement of 4.25 million Syrians within the country and at least two million refugees, the United Nations states.

South Africa has called on international leaders to support the UN, which should mandate military intervention “only if other measures are deemed insufficient in bringing about a peaceful resolution of a conflict situation,” Ebrahim said.

Putin told a conference that those countries who would strike without or against a UN decision would be acting “above the law”.

Ban Ki-moon advised G20 leaders against military action as it could cause “tragic consequences” and increase violence in the region.

â€œWe should explore ways to avoid further militarisation of the conflict and revitalise the search for a political settlement instead,” he said.

British Prime Minister David Cameron has called the case for military action â€œextremely powerful” despite being rebuffed by his own ministers on 29 August.

He said: â€œ[I] understand and respect what the UK parliament has said, so Britain will not be part of any military action.

â€œThis is the humanitarian crisis the world and our generation faces,” he added.