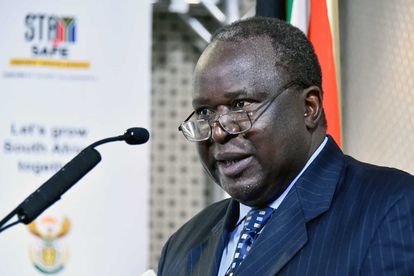 The Minister of Finance, Tito Mboweni, delivers a Supplementary Budget speech to Parliament.

A Supplementary Budget has been required by President Cyril Ramaphosa’s announcement that government would spend R500 billion to support the economy following the outbreak of the coronavirus. [Photo: GCIS]

The Minister of Finance, Tito Mboweni, delivers a Supplementary Budget speech to Parliament.

A Supplementary Budget has been required by President Cyril Ramaphosa’s announcement that government would spend R500 billion to support the economy following the outbreak of the coronavirus. [Photo: GCIS]

Stay informed and up to date with all the latest news in South Africa by reviewing the day’s biggest headlines on Monday 26 October.

To say that Finance Minister Mboweni is a tight predicament, ahead of his much-anticipated Medium Term Budget Policy Statement (MTBPS) on Wednesday, would be an understatement. Following on from President Cyril Ramaphosa’s announcement of South Africa’s Economic Recovery Plan, which was revealed to Parliament earlier this month and resulted in Mboweni applying for an extension to deliver the MTBPS, the finance minister is charged with transforming theory into practical reform; a task made infinitely tougher due to the global pandemic and subsequent lockdown.

As Mboweni puts the finishing touches on the MTBPS, attention, in keeping with the message broadcast by Ramaphosa’s Economic Recovery Plan, will be focused extensively on job creation. During the three months of hard lockdown — between April and June 2020 — more than 2 million South Africans lost their jobs. This ‘jobs bloodbath’ was preceded by an already-dire unemployment rate and dismal economic growth predictions.

Ramaphosa’s recovery plan aims to provide 800 000 South Africans with employment opportunities, and while this pales in comparison to jobs lost during the COVID-19 outbreak, critics have pointed to the elephant in the room; government’s bloated public wage bill which, in Mboweni’s own words, had become unaffordable.

This is a serious point of contention as Ramaphosa’s plan proposes job creation through massive public works programmes to bolster infrastructure. Before being thrown into the deep-end under Ramaphosa’s administration, Mboweni once said:

“Somebody please stop government officials from saying ‘we will create 100 000 jobs this year’. From where these jobs? You making life tough for us.”

Mboweni is also expected to address the issue of state owned enterprises — many of which have begged for exorbitant bailouts — and the progress of Eskom’s unbundling.

The Democratic Alliance’s (DA) Shadow Minister of Finance, Geordin Hill-Lewis, who has been scathing of Ramaphosa’s ‘letter to Santa’, will brief the media on MTBPS expectations today.

Julius Malema to brief the media amid State Capture ‘investigation’

Economic Freedom Fighters (EFF) leader, Julius Malema, will host a press conference at 12:00 today. This comes at a critical time for the Red Berets’ political prospects. With tightly contested by-elections rolling out ahead of the 2021 municipal ballot, the EFF have redoubled their public presence with renewed vigour.

In recent months, coinciding with the easing of lockdown restrictions, the EFF has re-entered the mainstream political narrative in startling fashion. After declaring war on health and beauty outlet, Clicks — staging disruptive protests which forced nationwide store closures — and going toe-to-toe with fed-up farmers in the Free State, Malema has, once again, exemplified the polarisation of South African society.

But it hasn’t all been one-way traffic for the EFF. While the party has mobilised to ‘attack’, recent criminal charges of incitement to violence and a new investigation spearheaded by the Commission of Inquiry into State Capture has put Malema — and other senior EFF members – in the firing line.

According to recent reports, the Commission has subpoenaed major South African banks to provide financial records belonging to Malema, his wife, Mantoa, and his late grandmother, Sarah. EFF Deputy President Floyd Shivambu has also come into Zondo’s crosshairs for his connection to the wanton looting of VBS Mutual Bank.

For almost eight months, the sale and purchase of alcohol in South Africa has been strictly regulated in line with government’s lockdown response to the coronavirus pandemic. While harder levels of lockdown were met with an outright prohibition, restrictions on liquor sales have slowly been eased as infection rates decreased.

Currently, off-sale outlets are permitted to sell alcohol between 09:00 and 17:00 from Monday to Friday. The National Liquor Trade Council has, however, demanded that government return liquor sale laws to normal, as they were before the coronavirus arrived on South African soil.

In a formal letter delivered to President Ramaphosa, the National Liquor Trade Council cited damages to township-based taverns, bottles stores and independently owned traders. As a result, liquor traders have been forced to slash salaries and retrench staff.

The letter coincides with a crackdown on nightclubs, which, in line with the curfew, are prohibited from operation during Level 1 lockdown. While a recent surge of coronavirus infections in Cape Town has allegedly been traced to a nightclub in the southern suburbs — and is now the subject of an investigation authorised by Provincial Premier Alan Winde — a Sandton establishment was raided by cops on Saturday night.

According to Police Minister Bheki Cele, police raided the Black Door Lounge, which was operating beyond the 00:00 curfew, and discovered more than 300 partygoers. Police confiscated R800 000 worth of liquor and arrested the owner of the club who has been charged with contravening the Disaster management Act.

Gauteng Community Safety MEC Faith Mazibuko added that the owner could not produce a valid liquor license when questioned.

Demonstrators have marched to Parliament, demanding that President Ramaphosa condemn farm murders and attacks. The ‘Black Monday Movement’ — an annual event, to bring attention to the plight of farmers, which began in 2017 – this year, was set against the backdrop of violence in the Free State.

The murder of 21-year-old farm manager, Brendin Horner, sent shockwaves through the province and led to clashes between protesting farmers and police. Farmers blame police, and, Minister Cele, in particular, for not being proactive in safeguarding agricultural communities.

“Mr. President, I have been to the scenes of farm attacks. Mr. President, it is not only attacks, it is the brutality of these crimes.These farmers are honest, hardworking men and women, and all they ask are stop Farm murders now.

Without these farmers, there is no economic recovery.”

Zuma under pressure: Bank accounts and ANC membership could be terminated

Former president Jacob Zuma’s woes are set to worsen. In addition to recently being summoned to appear before the Commission of Inquiry into State Capture — coinciding with threats to subpoena his family’s financial information — Zuma now risks having his bank accounts frozen and falling out of favour with the ruling ANC.

According to recent reports, calls from within the ANC, to have Zuma and Secretary General Ace Magaushle suspended from the party, pending corruption investigations, seem to be gathering steady momentum. Recently, ANC members in KwaZulu-Natal, loyal to Zuma’s faction, called for an urgent national meeting to address ‘rumours’ of a purge.

The latest developments come after President Ramaphosa proclaimed that the ANC’s National Executive Committee (NEC) had resolved to enact a suspension policy which would see members facing criminal charges step aside from political duties.

Zuma is expected to return to the Commission of Inquiry into State Capture on 16 November, after lambasting Judge Zondo for using the judicial process to ‘fight political battles’.

CSA collapse: President and five other board members call it quits

With just a month to go until England face off against the Proteas for the first international test since February, Cricket South Africa is scrambling to fill positions left by a mass exodus of executives. This void emanates from damning reports into CSA’s sordid history of maladministration.

The CSA crisis has forced Sports Minister Nathi Mthethwa to threaten intervention, requesting that a detailed report on the organisation’s operational sustainability be delivered this week. Government intervention could, however, see South Africa scrapped from the International Cricket Council (ICC), throwing all future tests into serious question.

Super Rugby Unlocked: A look at the log after round three

Super Rugby Unlocked is a competition that is being played between seven of South Africa’s top professional rugby sides from 10 October to 21 November 2020.

Teams play each other once, home or away. The top-placed team at the end of that seven-week round-robin will be awarded the Super Rugby Unlocked title.

The two Super Rugby Unlocked matches that were played this weekend could not have been more different, with the Vodacom Bulls laying down a marker in Pretoria on Saturday, and the DHL Stormers sneaking through in Nelspruit on Friday.

The third match, between the Emirates Lions and Toyota Cheetahs that was scheduled to take place in Johannesburg on Saturday, was called off. If the fixture cannot be-rescheduled, both teams will take two log points.

For a detailed review of the weekend’s Super Rugby Unlocked action — and how the log looks after Round three — read here.