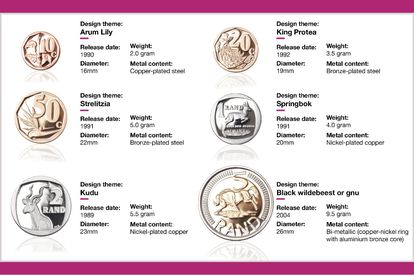 The South African government will introduce the Fourth Decimal Coin Series of the country in 2023, according to a statement from a virtual Cabinet Meeting held on Wednesday, 31 August.

The statement said Cabinet approved the dimension, design and compilation of the Fourth Decimal Coin Series of South Africa for the year 2023.

Cabinet also approved the annual rotational system for the languages used on the next coin series.

The word “South Africa” will appear on one side of the coins – the country’s name will be printed on the coins in all 11 official languages.

No images of the next coin series have been released as yet.

South Africa’s current coinage – the Third Decimal Coin Series – was introduced in 1989. The country began minting its own coins with the First Decimal Coin series in 1961.

The current coins were marked with South Africa’s coat of arms and name – in English and Afrikaans – from 1990 to 1995. Later, more languages were added. From 2002, the R1, R2 and R5 coins carried the country’s name in two languages on a rotational basis.