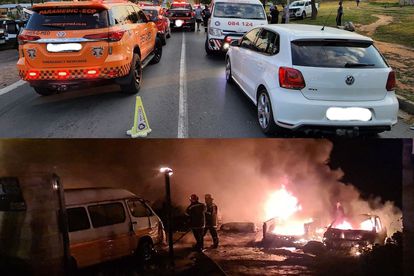 South Africa is the most dangerous country to drive in according to the international driver’s education company Zutobi. Photos: Twitter/@_ArriveAlive

South Africa is the most dangerous country to drive in according to the international driver’s education company Zutobi. Photos: Twitter/@_ArriveAlive

The roads of South Africa have been given the grim title of being the most dangerous country to drive in. The country scored an abysmal 3.41 out of a potential ten from international driver’s education company Zutobi.

DRUNK DRIVERS, NO SEATBELTS AND SPEEDSTERS

The conclusion is the result of the company’s 2022 in-depth analysis of variables like the number of alcohol-related road traffic deaths, the maximum motorway speed limit and the front seat belt wearing rate.

Zutobi says there are an estimated 22.2 road traffic deaths per 100 000 of South Africa’s population and only 31% of front seat passengers wear a seat belt on the country’s roads.

The world’s second most dangerous country to drive in is Thailand raking in a 4.35 out of ten score.

The company says it is due to Thailand having one of the lowest seat belt wearing rates and likely due to the fact that the country’s most preferred mode of transport are motorcycles.

The US is ranked the third most dangerous country to drive in, with a driving safety score of 5.03 out of ten. Zutobi says 29% of road traffic deaths were due to alcohol.

EUROPE HAS THE SAFEST ROADS

The driver’s education company found that Norway is the safest country to drive in with a safety score of 8.20 out of ten. Zutobi says it is due to low road traffic death rates and high seat belt use.

With only a 0.15 point difference, Iceland is a close second with a 8.05 out of ten score. The country’s highest speed limit is set at 90km per hour, which is much lower than the average of 120km per hour.

Estonia is the third safest country to drive in with a score of 7.90 out of ten. The country also has one of the highest seat belt wearing rates, 97.3%, for front seat passengers in the world. While the blood alcohol concentration limit for drivers is one of the lowest at only 0.02%.