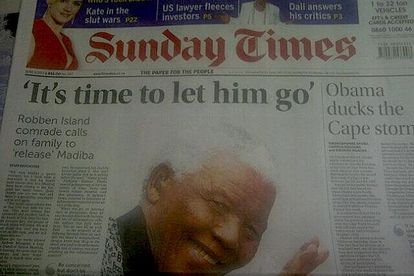 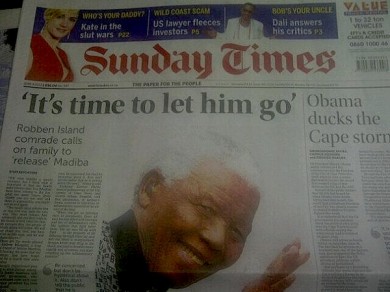 “It’s time to let him go” was the front-page headline in the South African Sunday Times, following Nelson Mandela’s return to hospital on Saturday for treatment of his recurring lung infection.

Perhaps even a year ago, such a headline would have been taboo, but it seems that at last, as Mandela’s condition is described as ‘serious but stable’ South Africans are slowly learning to say ‘hamba kahle, Tata’.

As the world once again holds its breath for news of the revered statesman’s health, there have been calls to face up to the reality that Mandela is an old and frail man.

Madiba’s friend Andrew Mlangeni, 87, who served time with him in prison, told the Sunday Times, “We wish Madiba a speedy recovery, but I think what is important is that his family must release him. Once they release him, the people of South Africa will follow. We will say thank you, God, you have given us this man, and we will release him too.”

It is the fourth hospital stay for Mandela, who turns 95 next month, since December.

Marelise van der Merwe, writing for Daily Maverick during Mandela’s last hospitalisation in April, was brave enough to express what others were afraid to.

â€œMy prayers are not for Madiba’s speedy recovery. My prayers and good wishes are that he will not have a long, drawn-out death; that he will be surrounded by loved ones and look back with satisfaction on the life he lived. He is an old, old man — one who crammed more into his active years outside jail than most people would do in two lifetimes.”

Van der Merwe likened South Africa’s predicament to that of a typical fairy tale where the main character loses his mentor at a critical stage.

â€œSouth Africa is at that critical stage now: we are staring into the abyss, the crisis times have come, and we are about to lose our father figure. But what happens in these stories? The fighter gets up and carries on; he moves forward with the tools the mentor has given him already. And if it is a good story, he emerges victorious.”

Van der Merwe said that if we really want to show love for Madiba, we should not be praying for his health; â€œIt’s not him that needs fixing. We should be praying for ourselves… He has paid his debt to South Africa, and more. He has led each of us to be a better person, a stronger South Africa. Surely it is time for us to lovingly let him go, and to move forward with the lessons he sacrificed so much to teach us,” she concluded.

One thing is certain: Madiba’s final passing will usher in a period of self-analysis probably not seen in South Africa since the coming of democracy in 1994; an unprecedented openness of debate about the exact achievements of South African democracy in its twentieth year.

Margaret Thatcher’s death, which marked the symbolic end of an era that saw Britain move irrevocably to the right of the political spectrum, may well pale in comparison to the scale of national introspection South Africans should prepare for.

All a-Twitter over Mandela: hoax death tweet and BNP vitriol