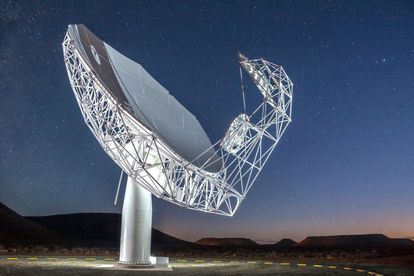 South Africa will now form an integral part of humanity’s eternal quest for alien life forms, thanks to one of the world’s most powerful telescopes situated in the Karoo.

Is there anybody else out there? That’s the philosophical question asked by scientists and laymen alike when staring out into the great universal abyss above. It’s a question as old as time itself, which can hopefully be answered by the MeerKAT telescope, a powerful space observation tool nestled in the wide expanse of the Northern Cape Karoo near a tiny town called Carnarvon.

The MeerKAT telescope, which was officially inaugurated in July of this year, consists of 64 dish antennas all pointing into space, looking and listening intently to the structure of the universe. The telescope is used for research into cosmic magnetism, galactic evolution, the large-scale structure of the cosmos, dark matter and the nature of transient radio sources

MeerKAT will eventually form part of a bigger stargazing project known as the Square Kilometre Array (SKA). With multi-radio telescopes in both South Africa and Australia, the SKA project, once completed, will be the largest scientific apparatus on Earth.

The MeerKAT has already managed to capture images from the centre of the Milky Way, 25,000 light-years from Earth. Fernando Camilo, the chief scientist at the South African Radio Astronomy Observatory (SARAO), said:

“We wanted to show the science capabilities of this new instrument. The centre of the galaxy was an obvious target: unique, visually striking and full of unexplained phenomena – but also notoriously hard to image using radio telescopes.

Although it’s early days with MeerKAT, and a lot remains to be optimised, we decided to go for it – and were stunned by the results.”

Breakthrough Listen is an international scientific initiative aimed at exploring the possibilities of extra-terrestrial life forms. According to the organisation’s website:

“Breakthrough Listen is the largest ever scientific research program aimed at finding evidence of civilizations beyond Earth. The scope and power of the search are on an unprecedented scale:

The program includes a survey of the 1,000,000 closest stars to Earth. It scans the center of our galaxy and the entire galactic plane. Beyond the Milky Way, it listens for messages from the 100 closest galaxies to ours.”

The announcement detailing the scientific program’s partnership with MeerKAT and SARAO was made on 2 October at the International Astronautical Congress. Yuri Milner, the founder of the Breakthrough Initiatives, lauded MeerKAT’s extraordinary ability to unlock secrets of the unknown universe, saying:

“Collaborating with MeerKAT will significantly enhance the capabilities of Breakthrough Listen. This is now a truly global project.”

Milner explained that the partnership will examine a million individual stars – 1 000 times the number of targets in any previous search. The collaboration aims to focus its gaze on ‘technosignatures’ – signals that indicate the presence of technology on an alien world.

If these signals are discovered, through the radio telescope, it will serve as proof to the existence of extra-terrestrial life forms.