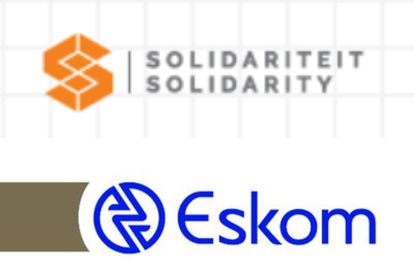 The union released a statement on Wednesday, 20 July, where it described the embattled power utility’s latest application submitted to the National Energy Regulator of South Africa (NERSA) as absurd, irrational and unlawful.

Solidarity’s statement follows news of Eskom’s application in which it requested a monthly tariff of R938 for consumers on their grid who are generating power themselves.

Solidarity says that the country’s only hope of getting out of the power crisis lies in small-scale power generation that is taking place on a large scale.

“It is one thing if Eskom does not want to contribute towards solving South Africa’s power crisis. However, by making proposals such as this Eskom is changing from being a millstone around the neck to being an enemy of reliable power supply. If Eskom does not want to be involved in solutions itself we will litigate until at least Eskom no longer stands in the way of others who want to solve the matter,”

The union further argued that the country should be going out of its way to encourage as well as facilitate private power generation.

“Instead of encouraging private power generation, Eskom now wants to tax it. Paying tax for a service is one thing; to pay taxes for no service is something totally different. Eskom now indeed wants to tax South Africans who are starting to provide their own services as a result of Eskom’s inability to supply power. Simply by tabling such a proposal creates huge uncertainty. The proposal should be eliminated as soon as possible,”

In related news, it was previously reported that the Democratic Alliance (DA) is anything but impressed by Eskom’s proposed solar power levy. Eskom requested that the National Energy Regulator of South Africa (NERSA) require that on-grid solar power users pay R938 every month – even though they are not using its power.

The DA’s Kevin Mileham referred to this as being ‘extortionate’ adding that it violates consumer rights. Mileham described the proposed levy as Eskom punishing homeowners and businesses who want alternative power sources.

Speaking about Minister Gwede Mantashe, Mileham stated that the idea of a second Eskom is a fantasy. Mileham noted that the embattled power utility, in whatever form, will not solve the country’s electricity crisis. Read the full story here.