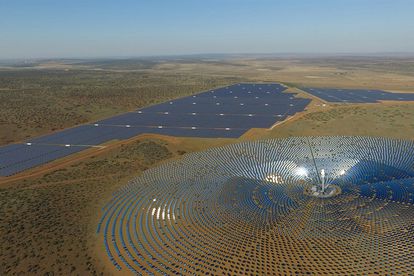 The Redstone Solar Thermal Power (RSTP) – a project first proposed back in 2015 – is a planned solar power tower with molten salt energy storage planned for the Northern Cape.

In 2016, a power purchase agreement (PPA) worth R50 billion with Eskom but was delayed due to a generation surplus. Two years later, the PPA was signed and Redstone confirmed in August 2019 that financing was complete.

Absa has now been appointed as the lead arranger, senior lender and hedge provider for the project, and it’s all systems go for the Northern Cape. The plan will generate solar power by using heliostats (or mirrors).

“Absa has been a leading financier of renewable energy projects in Africa and we have so far arranged and provided more than $3,5 billion of financing for more than 30 such projects and we certainly have an appetite for more, whether it is wind, solar PV, solar CSP, or biomass”.

According to Resource & Project Finance executive at Absa, Shaun Moodley, the project – one of the largest renewable energy investments in South Africa – will be built about east of Postmasburg.

Moodley explains that “an important feature of the Redstone CSP Project is that it will have 12 hours of full-load energy storage which will enable the CSP power plant to reliably deliver a stable electricity supply”.

This will benefit more than 200 000 South African homes “during peak demand periods, even after the sun has set”. He explains that it’s not only “a very important project from an energy perspective”, either.

“Overall, one can see that this is a very important project not only from an energy perspective but also in the form of both direct and indirect job creation”.

The solar power project will create approximately 2 0000 jobs, of which 400 will benefit the local community, while more positions will be created once the power plant is up and running.

Beyond job creation, the socio-economic benefits will also boost the local manufacturing industry, as up 40% of the required equipment and materials “has to be procured locally”.

“ACWA Power is proud to lead the energy transition in countries that are committed to ambitious renewable energy targets to support economic growth and social development. Redstone CSP adds another superlative to our budding record in South Africa, being the largest renewable energy investment to date. As grid links are improved, the ingenuity of the private sector together with the great support of experienced finance partners has the potential to spark lasting impact for local communities and address the threats of climate change.”