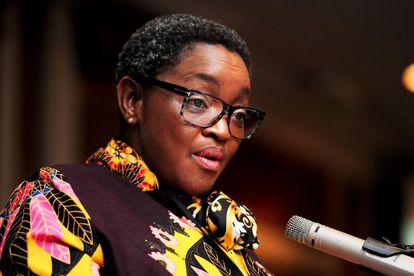 The Department of Women led by Minister Bathabile Dlamini together with the United Nations Population Fund (UNFPA) co-hosting the first ever symposium on Menstrual Health Management in East and Southern Africa. (Photo: GCIS)

The Department of Women led by Minister Bathabile Dlamini together with the United Nations Population Fund (UNFPA) co-hosting the first ever symposium on Menstrual Health Management in East and Southern Africa. (Photo: GCIS)

Former Social Development Minister Bathabile Dlamini is appearing in the Johannesburg Magistrates Court on Tuesday, 21 September 2021, on charges of perjury.

The Centre for Applied Legal Studies (CALS) confirmed in August that Dlamini will be prosecuted for perjury in relation to the 2016 social grants crisis.

Dlamini is accused of lying under oath during an inquiry into the social grants saga that was instituted by the Constitutional Court in 2017.

The company Cash Paymaster Services’ (CPS) contract with the South African Social Security Agency (Sassa) to distribute the grants had expired and was renewed on several occasions. Dlamini was accused of not properly presiding over the matter and failing to ensure that Sassa was better equipped to take over the issuing of payments to grant recipients.

In September 2018, the highest court in the land found that Dlamini had been negligent in her handling of the crisis and ordered her to pay a portion of the costs of litigation brought by the organisations Black Sash and Freedom Under Law (FUL).

The Centre for Applied Legal Studies’ Ariella Scher, which represented Black Sash in the matter, has hailed the decision to prosecute Bathabile Dlamini, stressing that such a move sends a strong message that everyone is equal before the law and even those occupying some of our highest offices must be held accountable for their actions.

Black Sash’s executive director Rachel Bukasa says this is a significant moment for holding public officials personally accountable for the execution of their duties and to protect the integrity of the social security system.

“The Black Sash remains committed to its goal to ensure that the right to social security is fully realised. While are pleased that the COVID-19 Social Relief of Distress Grant has been reinstated with the eligibility criteria expanded to include unemployed caregivers, we will continue to advocate for permanent social assistance for the unemployed while a universal basic income remains the ultimate aim,” Bukasa said.