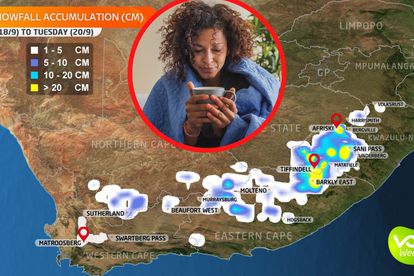 Brace yourself; snow and heavy rain will make landfall TODAY. Snow of up to 20cm while heavy rain of up to 100mm is expected in parts of South Africa.

WIDESPREAD SNOW IS EXPECTED TO START ON SUNDAY

According to VoxWeather, only light flurries are likely to fall over the Matroosberg Nature Reserve in the Western Cape.

“The snow will quickly melt, with most of the snow falling over the HIGH PEAKS of the Cederberg Mountain Range Into Monday, snow spreading over the Eastern Cape mountains and Drakensberg.

“Thundersnow is also possible on Monday into Tuesday over the Southern Free State, KwaZulu-Natal & Lesotho (Thundersnow – a thunderstorm that produces snow instead of rain).”

THUNDERSNOW POSSIBLE ON MONDAY AND TUESDAY

It furthermore said light flurries are still likely on Tuesday over a few small towns in the Eastern Cape like Dordrecht, Barkley East, Elliot. Thundersnow is possible in the Free State, including Harrismith, Clarens, Memel, and even Volksrust in Mpumalanga.

“Significant snow is expected to fall over the mountains of Lesotho, the Drakensberg into Wednesday More than 20cm is STILL possible to accumulate over Sani Pass, including at AfriSki, the Winterberg & Drakensberg.”

WHAT ABOUT THE HEAVY RAIN?

According to VoxWeather, disruptive rain leading to widespread flooding of roads and settlements, danger to life, and possible displacement of affected communities are possible.

A steepening upper-air trough, a surface trough, and a ridging high-pressure system are expected to result in windy, wet, and cold to very cold conditions across the province from Sunday until Tuesday. Significant accumulations are expected to fall in places south of the escarpment from Sunday, with the conditions to improve eastwards from Tuesday afternoon.