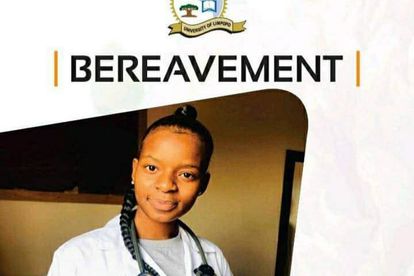 The slain final-year medical student was on the brink of obtaining her qualification when her life was cut short allegedly by her boyfriend.

Mandy Maloka (Ms Makola M), the final year medical science student enrolled in the Faculty of Science to study Medicine at the level 6 (final year) was reportedly murdered by her boyfriend who later took his life on 11 July.

FINAL-YEAR STUDENT ROBBED FROM BEING A DOCTOR

It is reported that the aspiring doctor was left with only four months before she could realise her dreams.

A bereavement poster by the University of Limpopo confirming the incident and funeral arrangements has been making rounds.

Hours leading to the funeral, friends and family gathered last night, Friday, 22 July, outside the Health Science Faculty premises to hold a candle lighting service in honour and memory of the final year medical student.

Mandy will be laid to rest today, Saturday, 23 July at Moroka Madifahlane village in Burgersfort in Sekhukhune District.

Her death comes weeks after another final-year student was murdered in Mpumalanga.

Mthunzi Wiseman Zwane, who was doing his clinical training as a final-year student at the Dihlabeng Hospital in Bethlehem, was stabbed 16 times and found in the river in Nhlazatshe, Mpumalanga.