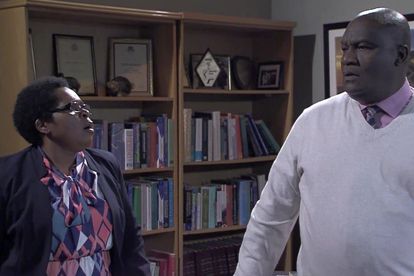 Veteran actress, Dieketseng Mnisi who plays the role of Mantuli Seakamela on SABC 1’s soapie Skeem Saam says, she did not approve at first when writers wanted to portray her character as a cheating woman.

She told Sowetan that she’s against cheating in real life, and that it became a challenge for her to play a woman who cheated and even conceived a child from the affair.

This resulted in the 60-year-old doing many retakes while shooting the scenes, and being reminded many times that she was acting.

HER AFFAIR WITH JOHN MAPUTLA

Millions of viewers tuned into the educational soapie to see the story of Mantuli and John Maputla’s (Africa Tsoai) secret affair unfolding.

MNISI OPENS UP ABOUT THE AFFAIR

Mnisi says Mantuli thought that she will be able to take her secret affair with John to the grave.

She said she knew she did her job as an actor when, she heard that it was trending on social media.

“Mantuli has had this intimidating demeanor but her situation with the Maputlas has exposed the other side of her.”

Mnisi also stated that she never thought she would get the role because she was intimidated when she auditioned with many Sepedi-speaking actors.

“When I auditioned I was worried that I did not speak the main language, which is Sepedi.”

“But the creator of the show, Winnie Serite, believed in me.”

“This is my first big role and it came after I had prayed hard for it,” she says.