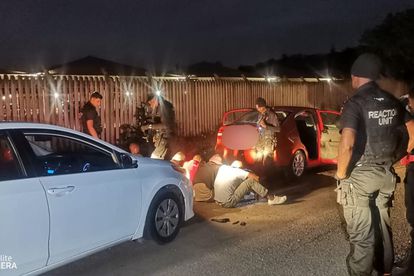 Six suspects were nabbed with dangerous weapons outside a business premises in Canelands in KwaZulu-Natal this morning, Sunday, 23 October.

SIX SUSPECTS WITH WEAPONS CAUSE PANIC

Reaction Unit South Africa (RUSA) says they received a tip-off from a member of the public that six males in a red VW Polo were parked outside a business premises.

“The caller informed the controller on duty that the males were behaving in a suspicious manner.”

THE REASON FOR THE SWIFT RESPONSE

Given the increase in shootings and armed robberies in the area, Reaction Officers were immediately dispatched to the location.

“On arrival at approximately 04:36, Officers interviewed the men who were unable to provide reasons for them being parked on the driveway. RUSA members searched the occupants of the vehicle and found one of them in possession of a replica firearm,” the company reported.

Among the six suspects, the following was found in their possession:

RUSA says the vehicle and exhibits were handed over to police for further investigation.

Meanwhile, a day ago a 26-year-old man was seriously injured after he was shot and stabbed multiple times.

RUSA received a call for assistance from an off-duty Sergeant from the KwaMashu SAPS requesting assistance for the injured male. The Policeman informed the controller on duty that the scene was in the vicinity of a sugar cane plantation in Inanda – KZN but couldn’t provide the exact location.

The RUSA Robinson R44 Helicopter lifted off from Verulam – KZN Helipad at approximately 16:08 to assist in the search for the injured male. He was eventually located lying next to a sugar cane plantation. The victim was found to have sustained a single gunshot wound to his chest and multiple stab wounds to his back. He informed Reaction Officers that he was robbed and attacked by a group of males.

The injured man was treated for his injuries on the scene before being transported to hospital in a serious but stable condition.