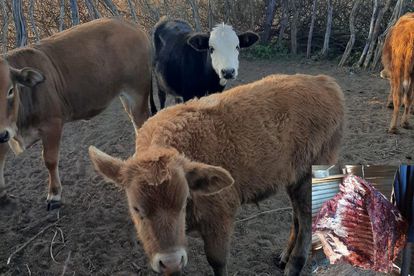 Six people were arrested for stock theft in the North West. Photo: SAPS

Six people were arrested for stock theft in the North West. Photo: SAPS

Alleged stock thieves will be appearing in court on Monday on charges of Stock Theft and possession of suspected stolen livestock.

The trio, Dikgogodi Providence Lentswe (46), Aobakwe Lentswe (28) and Koone Daniel Mogwase (29) are expected to make their second appearance in the Molopo Magistrates’ Court in Mmabatho

TRIO TO REAPPEAR IN COURT FOR STOCK THEFT

The accused initially appeared at the same court on Monday, 30 May 2022, and were remanded in custody following their apprehension by members of the Stock Theft Stabilisation Task Team.

According to North West police spokesperson Captain Aafje Botma, the team members were conducting a disruptive operation at the Bulfontein-Slurry auction on Friday, 27 May 2022, to enforce compliance with the Stock Theft Act, 1957 (Act No. 57 of 1957) and the Animal Identification Act, 2002 (Act No. 6 of 2002).

“During the operation, police stopped a vehicle with three male occupants, pulling a trailer loaded with six Bonsmara calves.

“It was established during the inspection that the calves were not properly brand marked. In addition, the calves were still bleeding from the ears due to newly performed traditional marks,”

In addition, the accused were then arrested for contravention of Section 2 of the Stock Theft Act, 1959 and possession of suspected stolen livestock after failing to account for the possession.

SUSPICIOUS CATTLE FOUND ON A FARM

Meanwhile, continuous efforts to address stock theft led to the arrest of three suspects for being in possession of suspected stolen livestock on Wednesday 1 June.

According to information received, the stabilisation team members received and operationalised information about suspicious cattle found on a farm in Makgobistad village outside Mahikeng.

“The members reportedly intercepted three males who were found in possession of 12 cattle and four calves. Furthermore, the carcass of a slaughtered cow was found in a shanty near the kraal,”

She added that the suspects, between the ages of 24 and 30, were consequently arrested after failing to account for the possession.

Lieutenant General Sello Kwena, the Provincial Commissioner of North West, thanked the members for their swift reaction, which led to the arrest of the suspects and the seizure of suspected stolen livestock.

ALSO READ: Police get illegal firearms and drugs off the streets