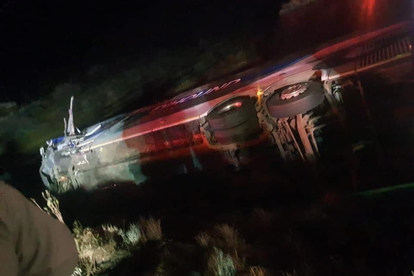 Arrive Alive reports: “Six people have died following a crash between a Greyhound bus and a bakkie 5 km outside Richmond in the Northern Cape.

It’s alleged the bus tried overtaking a truck on a double lane and crashed into the bakkie.
Local authorities were on the scene for assistance and further investigations”.

Commenting on the tragedy, the company took to its Facebook page to prove knowledge of the incident.

“We are aware that one of our coaches was involved in an accident that took place last night in the Northern Cape.
Please bear with us as authorities are currently conducting an investigation and we are managing the incident,” the report read.

A photograph of the bus lying by its side on an embankment has been making rounds – with some people venting about the drivers’ reckless driving since returning to business in April.

COMMENTS ABOUT THE GREYHOUND COLLISION

Muziwamangwane Ka Nyox said: “Bus drivers are known to be very reckless. They are very impatient and can overtake anywhere they feel like”.

Regy Sibanda: “I passed by the accident scene, what I saw was a terrible thing, people were still trapped corpses scattered on the tarmac”.

Dan Morley Daniels: “I boarded a greyhound bus from Johannesburg on Wednesday last week I can tell you those drivers are not professional. We almost had an accident on three occasions”.

Lynn Allwright: “Greyhound used to be the best, with the best drivers. So sad”.

This accident happens only two months after the bus company returned to business.

THE SHUTDOWN OF GREYHOUND DURING COVID

Greyhound which had been operating for 37 years ceased operating in February 2021, the company confirmed that their buses will no longer be in service.

Just in time for Easter Holidays, South Africa’s most popular luxury coach service made its return.