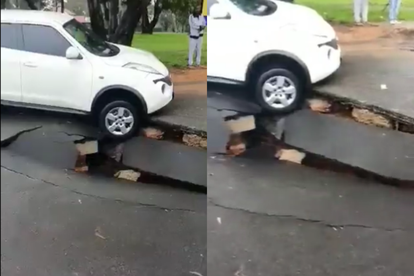 The Gauteng province has been hit with continued extreme weather conditions with disruptive rain causing widespread devastation. Reports of flooding, sinkholes and even an earthquake in the region have surfaced this week alone.

Reports surfaced online of a sinkhole in Kempton Park with a video of the incident revealing that what appears to be a white Nissan being damaged. The incident took place on the Stephanus and Beukes roads.

Furthermore the South African Weather Service has explained that the unusually heavy rainfall is expected to continue for the remainder of the season and even into autumn. The SAWS said on Wednesday that the phenomenon is known as La Niña.

The disruptive rain has resulted in the Vaal Dam being over 110% full with the Eastern Cape and KwaZulu-Natal experiencing flooding. Commenting on the situation the Department of Cooperative Governance has confirmed 82 fatalities across South Africa this season.

“We are currently in a La Niña, which means for our summer rainfall region, we are expecting above-normal rainfall. So, this forecast has been in play already. Last year, our seasonal forecasters were seeing the signals for our summer season. So, as we’ve seen, it has happened,”

In addition to the severe rain, the Council for Geoscience confirmed that the East Rand was hit with an earthquake on Tuesday.

In a statement on the situation, the earthquake registered a 3.5 on the local magnitude scale. Spokesperson Mahlatse Mononela confirmed that the epicenter was in Westonaria, 51km from Johannesburg.

“We can confirm that there was an earthquake at around 6.32am in Boksburg in the east of Johannesburg. Preliminary data indicates that the earthquake measured 3.5 magnitude on the Richter scale. At this point, it does seems like the earthquake occurred in a mining area. However, more details of the exact location are being gathered,”

In response to continued flooding in numerous regions, the South African government declared a second State of Disaster on Thursday.

Another USA retail giant heading to South Africa – THIS MONTH!

Daily devotion: Your bible verse and prayer for 03 October 2022