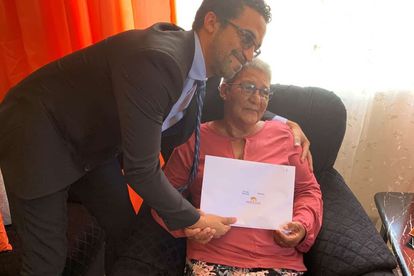 The residents were broken down to 21 from Villersdorp and 79 from Pineview in Grabouw. The people who received the title deeds had been living in their homes since pre-1994.

The residents had never received full ownership of their homes before today. Simmers celebrated the milestone saying:

“Today is a joyous occasion for these 100 residents, as they finally have full ownership of their homes. It was particularly pleasing to hand over title deeds to 76 year old Mary Damons and Isak (79) – and Aletta Hendrikcs’ (74) at their homes.”

“Seeing their gratitude and emotions, once again reminded me why we must accelerate the handover of title deeds to our residents.”

Simmers went on to commend the good work done by the Theewaterskloof Municipality. The minister revealed how the municipality had made sure that almost 200 people could receive title deeds.

The municipality pulled off this achievement in the last two months of the year. Last month, 120 residents in Caledon and 77 from Tesselaarsdal also became home owners, according to the minister.

“Today’s handover was made possible through their partnership with the Ipic Group and this shows what can be achieved through public-private partnerships.”

“As the Western Cape Government, we will continue striving towards establishing an enabling environment, so that we are better placed to grant beneficiaries security of tenure, thus making more residents, legal homeowners by handing over these title deeds.”

The Velddrif protests over title deeds

The handover came at a time just after protestors from Noordhoek, Velddrif, in the Bergrivier Municipal area, destroyed 53 newly built houses on 14 October 2019. The homes were part of the area’s Integrated Residential Development Programme (IRDP).

Altogether, the programme was supposed to build 107 houses. Protesters destroyed the homes because they were upset about the title deeds of several people being withdrawn at the last minute.

The withdrawal came after it was discovered that the people didn’t qualify for the Velddrif housing project. Last week, Simmers met with the community to discuss a way forward.