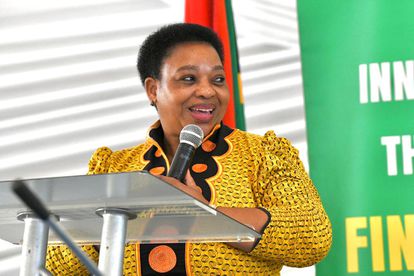 KwaZulu-Natal (KZN) Finance MEC, Nomusa Dube-Ncube has been shortlisted as one of the candidates who could replace former Premier, Sihle Zikalala.

On Friday, Zikalala held a briefing to announce his resignation as the Premier of KwaZulu-Natal after he was defeated by Siboniso Duma by over 200 votes for the chairperson position in the ANC elective conference that was held last month at the Olive Convention Centre in Durban.

Zikalala suffered yet another blow when he failed to make it to the ANC KZN Provincial Executive Committee (PEC).

Surprisingly, Zikalala is the only one from his slate who did not make it into the PEC. Outgoing provincial secretary Mdumiseni Ntuli, Nontembeko Boyce, Jomo Sibiya and Kwazi Mshengu made it to the PEC.

Nomusa Dube-Ncube who failed to meet the threshold in her bid to contest for the chairperson position also made it to the PEC as well eThekwini Municipality mayor, Mxolisi Kaunda.

The ANC in KZN said it welcomes Zikalala’s resignation with pain and difficulty as he was still doing a great job in the province since he took over.

The party said it is grateful for the job Zikalala has done for the people of KZN and appreciate that he made a conscious decision not to leave office hastily.

“Comrade Zikalala’s tenure has come with a lot of good in the province, including a number of provincial government departments receiving unqualified audit outcomes for the first time.”

A new Premier will be sworn in once interviews are concluded and Zikalala’s resignation confirmed by the provincial legislature.

WHO COULD BE THE NEXT KZN PREMIER?

According to the ANC in KZN, the Provincial Executive Committee was instructed to make recommendations of three names of ‘comrades’ who will undergo an interview process.

The names of Nomusa Dube-Ncube, Amanda Bani and Mbali Fraizer were submitted and the three are going to be interviewed on Saturday.

ALSO READ: ANC KZN: Double blow for Zikalala as he fails to make it to PEC