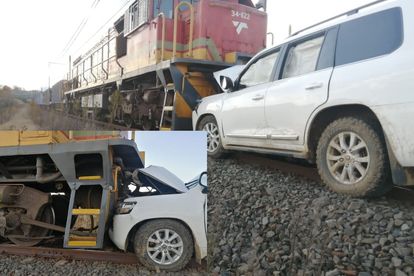 Photos of this incident were shared on social media and many had a lot to say about the driver’s ‘irresponsible’ behaviour. Photo: Sonette van Jaarsveld/ Facebook

Photos of this incident were shared on social media and many had a lot to say about the driver’s ‘irresponsible’ behaviour. Photo: Sonette van Jaarsveld/ Facebook

Social media users were not impressed with the driver who decided to take a shortcut and drove on the railway, just to have his car get stuck there and struck by a train on Sunday.

The incident took place on the Kransfontein railway in Bethlehem in the Free State. This after the driver of a Toyota Fortuner allegedly tried to avoid the N3 due to an accident.

Photos of this incident were shared on social media and many had a lot to say about the driver’s ‘irresponsible’ behaviour.

“The driver wanted to take a shortcut to KwaZulu-Natal since there was an accident on the N3 highway and traffic was bad. He decided to drive on the railway,”

Mophiring said according to the driver or the train, he hooted when he noticed the vehicle. Subsequently, the train ended up crashing into the vehicle which had no occupants inside.

The driver of the train called the police to report the matter. Mophiring said the occupants of the vehicle were nowhere to be found. No one was injured in the incident.

He did however say that they are not sure if anyone has come forward. Police have since registered an accident report.

Meanwhile, Transnet on Tuesday, to Netwerk24 condemned the irresponsible and dangerous behaviour of the driver.

Spokesperson, Mike Asefovits said the case was registered with the police and railway safety regulator.

The motorist is being charged with wrongful entry and third party damage.

It was still not known at the time of publication if the driver has come forward or not.

Meanwhile, 16 people died in the horrific multiple vehicle collision on the N3 southbound. It happened in Pietermaritzburg on Saturday morning.

Some taxi occupants burnt to death in the collision between Peter Brown and Chatterton Road off-ramps in Pietermaritzburg.