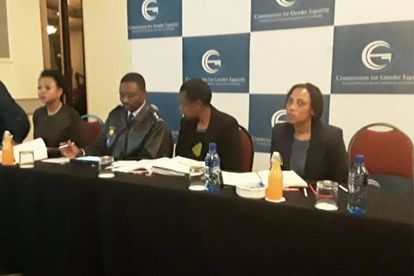 Lieutenant-General Bonang (far left) is representing the police chief on the state of shelters in South Africa for abused women and children. Image via: @OurReporter Twitter

Lieutenant-General Bonang (far left) is representing the police chief on the state of shelters in South Africa for abused women and children. Image via: @OurReporter Twitter

Earlier in 2019, the Commission for Gender Equality (CGE) released a report on the state of its shelters, showing it was low on funding. After the commission continued with hearings this week, the conclusion remains the same.

According to TimesLive, the investigation found for a second time that there was a lack of funding at most of the shelters and some of them lacked proper facilities and security. It also indicated that there was no proper support in place for women after they left the shelters.

A spokesperson for the commission, Javu Baloyi, said the investigation started after stories were published in the media and they received complaints from victims.

Only one GBV shelter in Limpopo

The head of the department of social development in Limpopo, Mapule Ramokgopa, got slammed by commissioners after presenting her report which revealed there were only two shelters in the entire province, one of which is not in operation.

“It’s really worrying to hear that a province as vast as Limpopo only has one shelter. It’s unbelievable,” said one of the commissioners, Sepanya Mogale.

Chairperson of the Commission, Tamara Mathebula said the report from Limpopo was depressing and showed that there was little done by the province around shelters.

“There was no meat in your report. You just gave us general figures that anyone can easily access. Your presentation showed that shelters are at the bottom of your list,” she said.

Baloyi said that after the hearings, the commission would compile a report that would be handed to different portfolio committees in parliament and to President Cyril Ramaphosa.

As reported by TheSouthAfrican.com in June, there were many gender-based violence shelters that needed funding. This, according to the report released by the Commission for Gender Equality on 24 June 2019.

The Commissioner for the Commission for Gender Equality, Nthabiseng Moleko said: “All shelters in SA are really crying out for funding – particularly those funded by the department.”

Funding not received on time

Moleko added that the shelters funded by the government often did not receive their funds on time. Some shelters were highly equipped and had enough staff while others were located in a converted shipping container.

“Some were paid late putting pressure on the work required. Minimum standards for infrastructure for all shelters were not the same,” said Moleko.

The report also looked at shelters across the country. Moleko stated that the Department of Social Development seemed to not have a systemic model for funding them.

“I think from a policy perspective we are saying we need a clear gender budgeting framework or indicators. We need budget allocations specifically targeted to deal with the problem of gender-based violence. Not only with shelters but also with the policing and the justice clusters,” said Moleko.

Many victims of gender-based violence have often stayed with their abusers because they were not able to support themselves.

“They often stay with their abusers because they have no other option due to financial reliance,” said Moleko.

She added that shelters need to look at partnering with training service providers and government-funded education institutions.