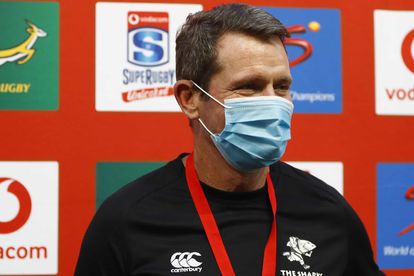 The Sharks have confirmed that Sean Everitt will remain head coach of the KwaZulu-Natal side until at least 2024.

The Sharks have confirmed that Sean Everitt will remain head coach of the KwaZulu-Natal side until at least 2024.

The domestic season is in full steam, as the Currie Cup kicks off on Friday with the Sharks hosting the Pumas at Kings Park on Friday night.

After falling short of clinching the Super Rugby Unlocked title, which went to the Bulls, the men from Durban look to begin this particular competition with a good result against the Pumas, who gave the big guns a run for their money over the past few weeks.

Coach Sean Everitt has brought out the big guns once more for the clash, with the bench also looking formidable, thanks to a couple of Springboks set to come in later in the contest. One of the big names in the starting 15 is world cup-winner Thomas du Toit.

“These guys haven’t had much opportunity this season, but we have managed to grow the depth and give some youngsters senior rugby experience which was always part of our aim,” Everitt explained.

“Rotation has helped us and the fact that Thomas du Toit has returned this week is, for us, a big boost. We struggled in our set-pieces when he wasn’t there and although the other players were good, it’s great to have a Springbok back.”