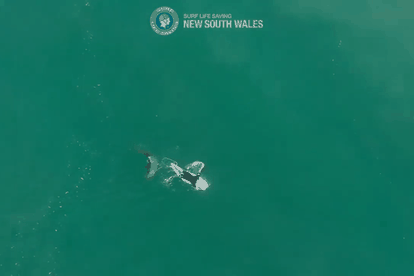 Aussie pro surfer Matt Wilkinson had a hair-raising close encounter with a shark while surfing on the New South Wales coast this week.

The drone, operated by the state’s lifesaving organisation, arrived overhead and alerted Wilkinson via its speaker, at the same time as a 1.5m white shark surfaced just behind him.

Amazing visuals captured by the drone stunned the operator with the speed at which the shark appeared on his screen during a routine surveillance flight.

Shocked at the encounter

According to a media statement from Surf Life Saving New South Wales, Wilkinson said he was aware the drone was overhead and heard the warning, but was still shocked to encounter the shark at such close range.

The near miss was another lucky escape for Wilkinson, who competed in the heat just before Mick Fanning experienced his encounter with a large white shark – possibly a Great White – at Jeffrey’s Bay in South Africa in 2015 during the finals of the J-Bay Open professional surfing competition.

Fanning was in the water with Julian Wilson when the shark swam next to him. Fanning punched the shark, which then bit off his leash attaching the surf board to his body.

Fanning then began fleeing back to shore as Wilson paddled towards him to assist and was later praised for his selfless action.

Explaining his narrow escape this week, Wilkinson said:  “I was just cruising on my own and I heard a splash and a noise and looked around and couldn’t see anything”.

“Then the drone came down and told me that there was a dangerous shark in the area [and I should] return to the beach.

He added: “I got to the shore feeling a bit weird and the lifeguards showed me the footage and I realised how close it came without me knowing it was there. It looks like it’s going for my leg and it has changed its mind.”

Wilkinson said that when he saw the footage he noted the similarities to the Jeffries Bay attack.

“Like I had a yellow leg rope on and Mick’s board was yellow. [That’s] what I was thinking about when I came [back to shore].