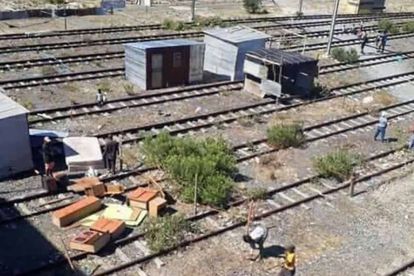 Squatters who have set up shacks directly across the Philippi and Langa railway tracks in Cape Town, will soon have to witness their makeshift homes being torn down.

The Passenger Rail Agency of South Africa (Prasa) announced on Sunday 8 March that a project is underway to remove the illegal structures and relocate the hundreds of people who have been living in harm’s way.

Harm’s way is no exaggeration. The tracks near the shacks are fully functional. Since they were erected in January 2019 on the site of the old Philippi depot, Prasa has been unable to provide signalling and have feared that trains would collide with the structures.

Transport Minister Fikile Mbalula visited the Siyahlala informal settlement site in Langa on Thursday 5 March, and videos posted to his Twitter account show the dire living conditions of the people living in the informal settlement.

Mbalula said that because the squatters had nowhere to go, they had made an unthinkable decision to position themselves on the railway tracks. He also vowed to put in place measures to assist them with relocation.

“Our people don’t have land and have seized Prasa’s land to build shacks on tracks,” he said. “We understand and sympathise with them and they agree we have to move them when we fix the central line.”

He said that discussions with those occupying the precarious space had been amicable.

“The people agree and promise to cooperate with authorities to remove and place them elsewhere,” he said. “Clearing the trail network on the central line to get back out trains. There is a lot of work ahead, and working together we will do more.”

The informal settlement has no access to ablution facilities or running water, and Metrorail spokesperson Riana Scott said that the situation is placing both the squatters and the rail authority in danger.

“These informal settlements are without amenities and services, leading to illegal electrical connections, disposal of sewage on to rail reserves, and impedes rail modernisation,” she said.

City of Cape Town committee member for human settlements Malusi Booi said that while the City would assist with the removal and relocation of the squatters, their decision to set up a community on the tracks was dangerous and irresponsible.

“Staff are on the ground 24/7, always ready to assist where they can,” he said. “Unfortunately, the illegal occupation of buildings and land mostly brings misery, as invaded land becomes a flood, fire and health risk.”