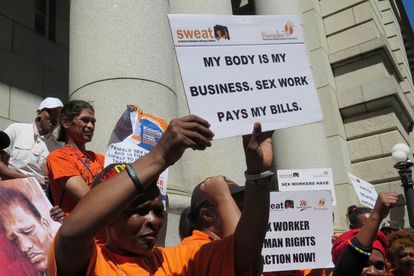 It’s about time! The South African government is looking at legalising sex work. The profession is said to have between 120 000 and 180 000 workers.

Organisations representing sex workers and activists have advocated for legislation that recognises the profession as work, and allows the industry to be governed by existing labour and business laws intended to prevent unsafe, exploitative and unfair business practices.

The Department of Justice and Correctional Services said Deputy Justice Minister, John Jeffery is set to meet stakeholders including religious and traditional leaders.

Jeffrey said it is important that they fully engage with stakeholders regarding the proposed policy options as there are divergent views.

“We need to further engage with relevant government departments to ascertain the implications of changing the legislative framework and we also engage the public on their views,” he said.

According to the Global Network of Sex Work Projects, the laws and subsequent marginalisation of sex workers makes them more vulnerable to assault by the police, clients, third parties and brothel owners.

“Sex workers are often targeted by the police and are more vulnerable to violence because they have to work in dangerous and isolated locations to evade attention. The current South African approach to sex work is that of criminalisation and prohibition.”

“Decriminalising the industry probably looks like promoting promiscuity to you. To a sex worker, it could mean being able to feed her children without contracting multiple diseases, getting raped, beaten or even getting killed.

Freedom only looks like chaos to those who are already free,” one user wrote reacting to the news.

“This debate on legalising prostitution is extremely dangerous. With poverty being so high, I hate to see the number of young girls who are going to be trapped in this trade. More HIV & STDs and more sex women from neighbouring countries. State not fit to control this industry,” another said.