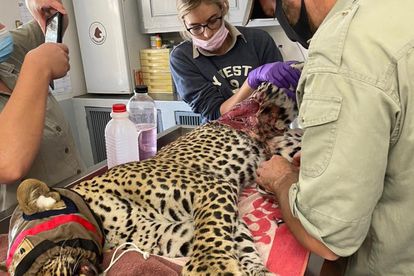 A beautiful female leopard has been rescued after she was caught in a snare and was severely injured.

THE INJURED LEOPARD WAS FOUND NEXT TO THE BLYDE RIVER

The leopard would have died a horrible, painful death if she was not rescued in time.

African Wildlife Vets recently assisted with the snare removal off of the middle-aged female leopard next to the Blyde River.

“After being immobilized by Wildscapes Vets, Dr. Ben Muller and Dr. Joel Alves, she underwent 4 hours of intensive surgery to repair the cuts to her abdomen that had cut right through her mammary glands.

“The leopard has been held in a boma at Moholoholo Rehab Centre for observation and to receive food and medication. Her progress is still being monitored as she still requires special care and treatment.”

The operation on the poor leopard was made possible by the Snare Rescue Group, Down 2 The Wire, Wild Wonderful World, Blue Sky Society, and African Wildlife Vets.