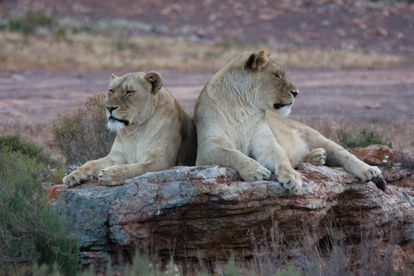 Questions have been asked of the SANParks team in Beaufort West this week after they killed seven lions who’d escaped from the Karoo National Park on Monday. Local politicians and wildlife conservationists were shocked by the response.

This is according to Fiona Miles, director of FOUR PAWS in South Africa, after the news that 7 wild lions were killed after escaping from the Karoo National Park in the Northern Cape for a second time, attacking livestock closeby.

Why were seven lions killed in the Karoo?

Three of the escaped lions killed 10 sheep in the community outside of Beaufort West. SANParks rangers were activated and managed to get them safely back inside, only for the lions to break out yet again on Monday night.

After making their second escape, the lions stalked the mountainous terrain of the Greater Karoo. Helicopter support was called in, and fearing there was a genuine threat to human life, the rangers made the decision to kill the roaming animals.

SANParks left with questions to answer

Daylin Mitchell, the DA Constituency Head in Beaufort West, has spoken on behalf of an outraged community in the Western Cape. He has asked SANParks if they considered an alternative method to get the lions back under control, and maintained that our ‘national treasures’ must be protected at all costs.

“We are shocked to learn about, what we believe is, the excessive culling of a pride of seven lions in the Karoo National Park near Beaufort West. According to SANParks, the decision to put down the pride was made after two escapes in 24 hours that pose a danger to the surrounding areas.”

“Although we accept the risks and dangers neighbouring areas may face in such circumstances, we want to know whether all alternative options were considered before this drastic step was taken. Why was the border fence not properly fixed after the first escape; and did the second escape take place at the same place?”

“We would also like to know if the fence is now properly fixed. Mzansi is known for its rich and unique wildlife, and all of us have the responsibility to preserve this national treasure at all costs. The DA will hold those accountable who act otherwise.”