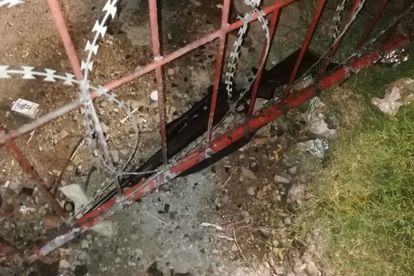 A firearm recovered that was during the arrest of the seven suspects. Photo: Supplied

A firearm recovered that was during the arrest of the seven suspects. Photo: Supplied

Seven greedy suspects who went on a robbery spree were arrested in the early hours of Sunday morning.

Police spokesperson Colonel Priscilla Naidu said soon after a business robbery took place at a garage in Rocklands on Saturday evening all police vehicles were alerted to be on the lookout for a yellow Mazda 323 vehicle.

“Within 3 hours after committing the first robbery, the greedy suspects struck again, this time robbing a garage in Durban Street in Kariega.”

Naidu said in the first incident, at about 22:45 on Saturday evening 5 March 2022, a yellow Mazda 323 drove into a garage in Rocklands in the Kabega Park policing precinct.

“There were five occupants in the vehicle of which three got out and pointed a rifle and a 9mm pistol at the petrol attendants.”

Cash, keys, a card swiping machine, and the petrol attendants’ cellphones were taken.

“The vehicle drove off towards Kariega.

She said while detectives were still attending to the complaint, they received information that the same vehicle was involved in another robbery at a garage in Kariega.

It is alleged that at about 1:30 on Sunday morning, SAPS Uitenhage members spotted the yellow Mazda 323 in Lower Drostdy.

Backup was requested and with the assistance of SAPS Despatch members, seven suspects were arrested.

“The two firearms were also recovered.”

She said the suspects had already robbed the garage in Durban Road taking cash and an energy drink.

“Ownership of both firearms is still to be established and the vehicle was impounded for further investigation.”

The suspects, all from Kwanobuhle, aged between 17 and 35 years old were detained on two cases of business robbery and are expected to appear in the Kariega magistrate court soon.

“Detectives are also probing their alleged involvement in another business robbery which took place in Cuyler Street in Kariega on Friday evening.”

Acting Nelson Mandela Bay District Commissioner, Brigadier Thandiswa Kupiso commended the members for the arrests and confiscation of the firearms.

“These criminals who went on a rampage since Friday have now been stopped and apprehended.”

“ We will be investigating their involvement to other cases in the metro.”

Kupiso added that they would also be working closely with the prosecuting authority to ensure that bail is denied and that they remain behind bars until the completion of investigations.