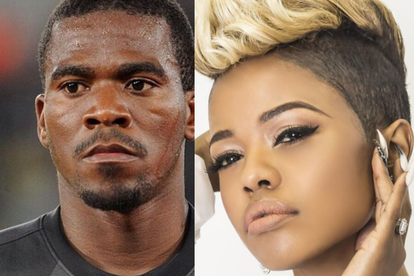 The late Senzo Meyiwa and Zandile Khumalo-Gumede. Images via instagram and twitter/@zandie_khumalo_gumede.

The late Senzo Meyiwa and Zandile Khumalo-Gumede. Images via instagram and twitter/@zandie_khumalo_gumede.

Legal representative for accused 1 – 4, in the Senzo Meyiwa murder trial, Timothy Thobane has told the court that a witness will come and testify that the late goalkeeper had sexual relations with his then-girlfriend, Kelly Khumalo’s sister, Zandile.

Thobane revealed this while he was cross examining State witness, Tumelo Madlala at the North Gauteng High Court on Thursday, 15 September.

WITNESS TO TESTIFY ZANDILE AND SENZO HAD SEXUAL RELATIONS

Tumelo Madlala has been in the witness box since Tuesday, 13 September. He has been giving his eyewitness account of what happened the night Senzo Meyiwa was shot at Kelly Khumalo’s home in Vosloorus, Ekurhuleni on 26 October 2014. He also told the court the events that took place the next few days following the incident.

Legal representative for accused 1 – 4, attorney Timothy Thobane kicked off his cross-examination by questioning Madlala on his close friendship with Meyiwa.

Thobane asked Madlala if he was aware that the late goalkeeper lived together with Kelly and her sister Zandile in an estate in Mulbarton, he said he wasn’t aware as he had visited the place before.

“I was not aware that Zandile lived together with Kelly and Senzo. The apartment had two bedrooms, when I was there, I came with my girlfriend. My girlfriend and I slept in one room while Senzo and Kelly slept in the other,” he explained.

Thobane further put it to Madlala that a witness will come and testify that Senzo and Zandile had sexual relations due to Kelly being away most of the time.

In response to that, Madlala said he would not be shocked by that as Senzo loved women.

Thobane further asked Madlala if he and the late goalkeeper discussed policies as he claimed they were close. Madlala said they did not discuss personal matters such as policies and insurances.

The defence counsel further put it to the witness that another witness will come and testify that Senzo and Kelly took a life cover together and Kelly was the signatory and beneficiary.