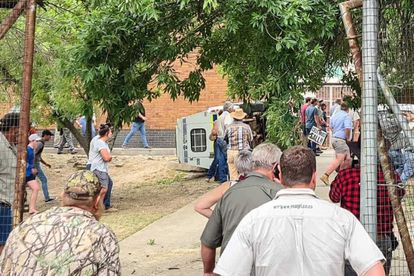 Another suspect implicated in the chaos that ensued in Senekal, Free State more than a week ago, is expected to appear before the Senekal Magistrate’s Court on Monday, 19 October 2020.

The 33 year-old was arrested on Friday and faces charges of attempted murder, public violence, arson and malicious injury to property.

The man is accused of having had a hand in the violence that erupted outside the same court, where two people were appearing for the murder of 21-year-old farm manager Brendin Horner. The incident sparked outrage within the farming community who ended up setting a police vehicle alight and stormed the courts, while demanding that the suspects be released to them.

Andre Pienaar, a 55-year-old businessman, was the first to be arrested after being accused of inciting violence by encouraging farmers to cause chaos in the courthouse. He was subsequently denied bail.

The presiding Magistrate Buti Mlangeni found that it was not in the interest of justice to release him on bail and that such a decision would spark massive anger. Mlangeni said he would also likely interfere with the witnesses.

At the same time, he has challenged the bail dismissal and the matter is set to be heard at the High Court in Bloemfontein.

Horner’s killing reignited racial tensions in the Free State town and culminated in a massive demonstration on Friday, where the suspects were appearing.

FF Plus lodges complaint against Malema

Leader of the Economic Freedom Fighters (EFF) Julius Malema led a protest, which he claimed was at protecting the constitution and democracy. Malema went on the rampage and called for white people to be held financially accountable for apartheid and other injustices.

The Freedom Font Plus party has also lodged a complaint against Malema and party supporters with the South African Human Rights Commission (SAHRC), for allegedly singing the “Kill the Boer”.

“This kind of behaviour is unacceptable. Farm murders are a reality and it is this kind of incitement and irresponsible statements that are without a doubt playing a significant role in farm attacks and murders,” the party’s Pieter Groenewald said.

In 2003, the FF Plus was successful in its effort as the HRC declared that singing the song amounts to hate speech.

“Julius Malema must be held personally liable because he is openly advocating hate and violence. Before today’s court case in Senekal, he even condoned the notion of a civil war”