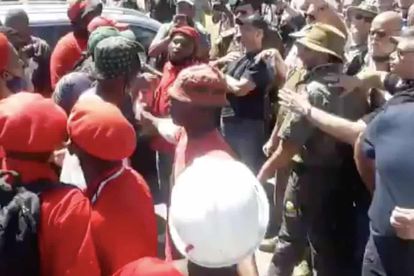 Supporters of the EFF and members of the farming community have faced off on Friday morning, as protests ensue outside the Senekal Magistrate’s Court. Photo: Screenshot.

Supporters of the EFF and members of the farming community have faced off on Friday morning, as protests ensue outside the Senekal Magistrate’s Court. Photo: Screenshot.

Members of the Economic Freedom Fighters (EFF) and the farming community in the town of Senekal in the Free State have “faced off” as counter protests continue on Friday 16 October between various political groups.

The town of Senekal in the Free State is usually a quiet farming town, but over the course of the last two weeks it has become the scene of a festering fusion of racial tension following the killing of 21-year-old farmer Brendin Horner and the subsequent protests at the Senekal Magistrate’s Court where tensions boiled over as the suspected killers appeared.

Thousands of EFF members and Afriforum have already descended on the town on Friday and are currently gathered outside the Magistrate’s Court, which was a scene of chaos a fortnight ago when a police van was attacked by a group of farmers, who also tried to gain access to the holding cells where the two men suspected of killing Horner were being held. One man, 52-years-old, was arrested shortly after the protest and was accused of public violence, malicious damage to property and – according to the National Prosecuting Authority – also terrorism and attempted murder.

Members of the farming community can be seen engaging in a standoff with supporters of the Red Berets, with both groups holding a distinct line and hurling abuse at one another.

As of yet, no violent clashes have been reported, with members of the South African Police Service having set up roadblocks to ensure that members of the various groups who are arriving in droves are not carrying weapons.

Both the EFF and civil rights group Afriforum have maintained that their respective protests will remain peaceful.

Droves of EFF supporters have arrived at the Senekal Magistrate’s Court, and leader Julius Malema has addressed his loyal followers, calling for peaceful protest and insisting that their presence is not to demonstrate support for those accused of the brutal killing that set the current unrest off, but rather to protect our democracy, our constitution which is under threat by racist terrorist farmers who go and attack a court of law, storm a court of law and a police station and chase police around”.

“That’s a declaration of war against the state,” he said.

Police Minister Bheki Cele has also arrived at the Magistrate’s Court. He is expected to address the media after the court hearing is adjourned.