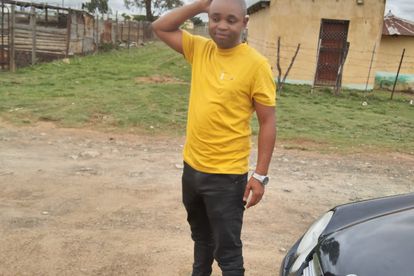 Seen this man? He can unlock case of a cop, sangoma robbing a loan shark Photo: SAPS

Seen this man? He can unlock case of a cop, sangoma robbing a loan shark Photo: SAPS

A cop, a sangoma, and a man dressed in police uniforms allegedly barged into the house of a loan shark and robbed her.

The three suspects allegedly robbed her of bank cards and cash and then kidnapped her two brothers.

The police officer, Constable Mfundo Ntshiba, 35, and his two accomplices were dressed in police uniforms. The trio allegedly forced their way into the house of a loan shark.

They allegedly robbed her of 98 bank cards and cash to the value of R22 000, said Hawks spokesperson Captain Yolisa Mgolodela.

The suspects allegedly took the loan shark’s Suzuki Ertiga car and kidnapped her two brothers. She, however managed to escape, Mgolodela said.

“The vehicle and two brothers were later found safe.”

This comes after the victim reportedly managed to identify one of the suspects as Constable Ntshiba. Ntshiba allegedly reported late for his night shift duties at his workplace, Cala Community Service Centre.

He allegedly told his employer that he had a “problem to attend to”, said Mgolodela.

“Ntshiba was arrested and that led to the arrest of Xolile Makhosini, 37, his accomplice, who is a taxi owner and a traditional healer.”

During their arrest, a Toyota Fortuner, a Corolla and a VW Polo were confiscated.

The vehicles are reported to have been used during the commission of the crime, Mgolodela said.

The arrested duo appeared before the Cala Magistrate’s Court on 7 July 2022.

Makhosini was released on R3 000 bail. But Constable Ntshiba was denied bail due to him being a law enforcement agent.

“Ntshiba appeared three times in court, with 25 July being the last date.”

But the Constable also managed to escape police custody after being denied bail on the said date.

Police are, however in search of someone who can help unlock the case, said Mgolodela.

“The task team is appealing to the public to assist with information that can lead to the location of Vuyisani Topo, in the picture, as he is believed to be the relevant person to assist in unlocking the case. Anyone with information can contact Constable Cabane on 082 371 6576. The information will be treated with the strictest confidentiality,” said Mgolodela.