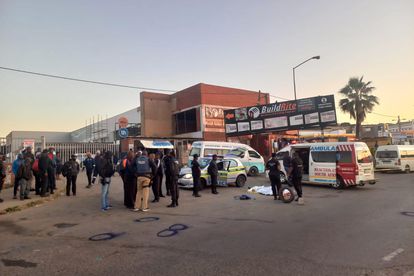 A 41 year old security officer was allegedly killed in a hail of bullets in Besters, KwaMashu in KwaZulu-Natal (KZN) on Thursday morning.

The man was reportedly killed in an unprovoked attack.

According to Reaction Unit South Africa (RUSA), the deceased was in the process of boarding a mini bus taxi when he was approached by a man dressed in blue shorts, sandals and a navy sleeveless jacket who shot him at least ten times.

The gunman fled without stealing anything.

The victim was dressed in his company uniform and was on route to his site in Phoenix in KZN when he was attacked.

“Reaction Officers and RUSA Medics were immediately dispatched however on arrival discovered that the deceased had succumbed to his injuries.

“Upon examination he was found to sustain ten (10) gunshot wounds to his head, back and arms. The motive for the shooting remains unknown at this stage.”

Two other security officers & a Policeman were gunned down in separate attacks in KZN on Wednesday.

Warrant Officer Michael Jameson has been hailed a hero after he was shot dead while responding to a hijacking outside his daughter’s school in Glenwood, KZN.

Jameson was off-duty when the incident happened.

National Commissioner of the SAPS, General Fannie Masemola said police are working around the clock to apprehend those responsible for the murder of the late police officer.

“The late Warrant Officer died a hero as he died serving and protecting the people of this country. He indeed served with pride as he placed himself on duty and put the safety of his community before his own.

“We will not rest until the late members’ killers are traced and apprehended to answer to this callous act.”

Amazon wins rights to Champions League matches in the UK