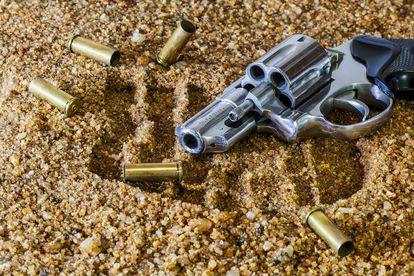 The security guard allegedly opened fire directed at the victim who has not yet been identified. Image: Pixabay

The security guard allegedly opened fire directed at the victim who has not yet been identified. Image: Pixabay

Secunda police are investigating a fatal shooting that happened on 23 November 2022 in Secunda.

Man dies after security guard opens fire on him

Members of the police received information regarding a shooting incident at Nelson Mandela drive in Secunda at around 8:00.

On arrival, they found an ambulance with the man inside.

It was said that the security guard opened fire directed at the victim who has not yet been identified.

ALSO READ: CPF chairman in Secunda in custody for shooting a ‘suspect’

Security guard arrested in connection with the shooting

The security guard was arrested by police on the scene and charged with murder.

The firearm believed to have been used during the shooting was confiscated by police to be used in further investigation.

A preliminary investigation has found that the firearm belongs to a security company the arrested guard was employed by.

The victim was taken to the hospital by ambulance where he succumbed to his injuries.

The suspect will appear in court on 25 November 2022 in the Secunda Magistrate’s Court on charges of murder.