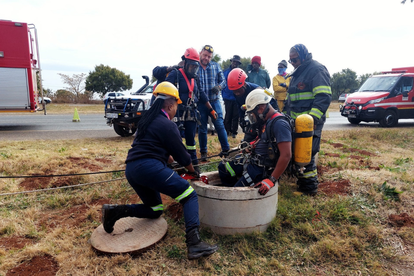 The search for the missing six-year-old, Khayalethu Magadla, who fell into a manhole while playing with his friends in Dlamini Park, continues.

Rescue teams hinged on the hope that specialised robots might assist in locating his body as the operation in Soweto went into its fifth day on Friday, 17 June.

Search and rescue moves onto next phase

Earlier, Joburg Water spokesperson Seipati Nyawuza said technicians went into the second section of the pipeline using an external air supply system. Another team of rescuers placed a robot with a camera underwater for navigation.

Sewer pipeline made up of eight manholes

Today, the search and rescue teams will move to the third section along the sewer pipes. According to Mulaudzi, searchers cleared the first two sections, starting where the little boy fell into the manhole.

The sewer pipe comprises eight manholes, including the ventilation shaft. On Saturday, rescuers will resume the search starting at the third section and progress along the pipe.