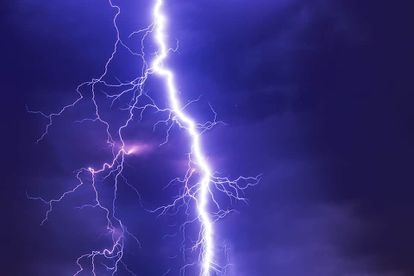 The wild weather over the mid-to-north east of South Africa has claimed another life in extraordinary circumstances. It’s been revealed that a man from Sasolburg, Free State, was struck by lightning on Monday afternoon.

The ER24 team confirmed the death via their website. They state that a group of locals were seeking shelter from the storm, but one of them was directly hit by the bolt.

By the time emergency services had arrived on the scene, the unfortunate victim showed no signs of life. He was pronounced dead just after 16:00:

“Shortly after 16:00, paramedics from ER24 arrived on the scene where they found the man in a room on the premises. Bystanders explained that they were working outside when it started to rain. They apparently tried to seek cover in the nearby room when one of them was struck by lightning.”

“His colleagues pulled him into the room shortly after the incident and called emergency services. Paramedics that arrived on the scene found the man with no signs of life. Sadly, there was nothing that could be done for him and he was declared dead on the scene.”

Sasolburg: What are the chances of being struck by lightning?

The odds are relatively low. It’s approximately a 300 000 to one chance. Yes, that’s quite far-out, but it is nothing like impossible: You’re over fifty times more likely to be hit by a lightning bolt than you are to win the Lotto in South Africa. Which is just incredible, all things considered.

How many people are killed by lightning each year?

It’s estimated the 24 000 people succumb to their deaths this way every year. That’s pretty scary, hey? What is more, the mortality rate works out to be 66 people a day. Of course, some people are more exposed to this threat than others – rural areas are the most dangerous locations.

Lightning strikes can cause cardiac and pulmonary arrest (no pulse and no breathing), temporary paralysis, temporary deafness, or minor to severe burns in other cases. During a storm, you need to stay indoors until it’s all over. If you can’t get to shelter, make sure you are lying or crouching on the ground.