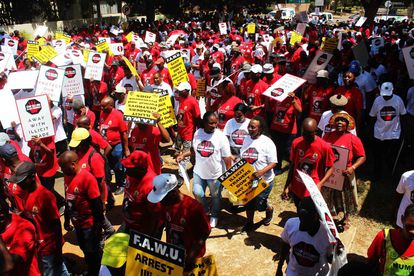 SAPU is one of the unions affiliated with Saftu that revealed that a protest certificate was issued. Photo: saftu.org.za

SAPU is one of the unions affiliated with Saftu that revealed that a protest certificate was issued. Photo: saftu.org.za

Unions affiliated with the South African Federation of Trade Unions (Saftu) were issued a certificate that allows them to go forth with a legal strike.

The South African Police Union (SAPU) is included in the public service labour unions that received the certificate. News of the certificate follows members of SAPU and of the Police and Prisons Civil Rights Union (Popcru) who held separate protests on Tuesday, 20 September.

On Tuesday, workers delivered a memorandum of demands to both Minister of Police Bheki Cele and Correctional Services Minister Ronald Lamola.

Government reportedly offered a 3% wage increase that was rejected

The unions reportedly rejected a 3% wage increase offer from Government. They have since called for austerity measures to be done away with and for police killings to end, reports SABC News.

Spokesperson for SAPU Lesiba Thobakgale said that a demand of 8% was continuously placed before a Commissioner.

“SAPU and Saftu affiliates and trade unions at the PCSBC (Public Service Coordinating Bargaining Council) today embarked on a process of conciliation where the demand of 8% was continuously placed before a Commissioner. The employer did not accede to our demands. We will draw down the picketing rules and ballot our members at the LRA in preparation for a strike,” said Thobakgale.

Meanwhile, it was reported that staff members of the African National Congress (ANC) claim they have not received their pay for two to three months. These picketing workers have threatened to shut down the ruling party’s offices and operations for the week.

The ANC workers say the party has failed to pay a number of salaries, even though they previously committed to do so. On Monday, 19 September, a number of ANC staff members participated in a national shutdown across the country.

A number of these staff members picketed outside Luthuli House headquarters. Many were seen holding placards. SABC News reports that there were protests earlier this year and even last year over the same salary issue. Read the full story here.