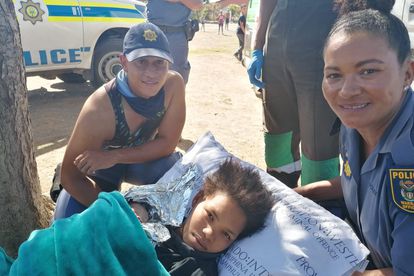 Worcester police with the new mom and her baby.
Photo: SAPS

Worcester police with the new mom and her baby.
Photo: SAPS

Worcester Police members went beyond the call of duty when they helped deliver a baby under a tree.

The healthy baby boy was delivered in broad daylight under a tree in Aan de Doorns Road on Tuesday, 15 March 2022 at around 14:50

Police spokesperson, Captain Frederick van Wyk said the local sector commander Warrant Officer Anneline Fielies was busy with patrols, when she was approached by a male, asking her to assist his girlfriend suffering from labour pains.

The member called the ambulance service for assistance, whilst she cordoned off the area with blankets.

“Moments later, the member delivered a healthy baby boy after which she was assisted by Constable Monray Prins, who was prepared to take off his shirt, in order to cover the newborn baby.

The local ambulance service arrived and transported mother and baby to a nearby hospital,” he said.

Recently, a 50-year-old police officer from Gqeberha came to the aid of a pregnant woman and helped deliver her baby on 1 March 2022.

It would seem that playing ’doctor’ and delivering babies while in police uniform appear to be part of  Warrant Officer Roderick Middelkamp’s daily routine. Middelkamp went beyond his call of duty as he delivered his fourth baby.

Gqeberha police spokesperson, Captain Andre Beetge said when a police officer reports for duty he/she dons on the cloak of a mother, father, social worker, law enforcer and many times a gynaecologist.

“Situations arise that warrant immediate action and society looks upon a police officer as ‘the jack of all trades’ and a saviour in times of crisis. In most cases, no matter the circumstances, our men and women in blue emerge victorious by showing that ’we can do it,” Beegte said.

The 50-year-old police officer with over 30 years of service in the SAPS,  is said to have proudly boasted  that this was his fourth baby (all girls) that he had delivered while at SAPS Despatch.