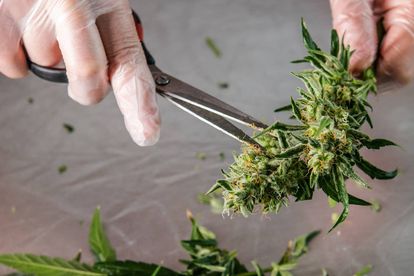 The South African Police Service (SAPS) have used the national lockdown to crack down on the illicit trafficking and trade of dagga.

In separate busts in the Northern Cape and KwaZulu-Natal, this week SAPS members seized over 300 kgs of dagga.

Richmond SAPS intercepted a vehicle transporting 200kg of dagga being transported to KwaZulu-Natal from the Eastern Cape.

“A 47-year-old suspect is expected to appear in the Richmond Magistrate’s Court on 14 May 2020, for dealing in dagga,” SAPS spokesperson Colonel Thembeka Mbele said.

“An intelligence-driven operation was conducted on 12 May 2020 at 23:00, by police officers from Richmond SAPS, Ixopo SAPS, K9 Unit and other security agencies following information about dagga that will be transported from the Eastern Cape to KwaZulu-Natal.

“The vehicle was spotted near the R56 highway in Richmond with one occupant. Police stopped the vehicle, and a search was conducted. Police recovered bags of dagga inside the vehicle weighing more than 200 kilograms.

“The suspect was immediately arrested and he was taken to Richmond police station for detention,” Colonel Mbele added.

“His vehicle was also seized for further investigation.”

KwaZulu-Natal Provincial Commissioner, Lieutenant General Khombinkosi Jula applauded the SAPS members from Richmond and Ixopo for their vigilance which led to the arrest of the dagga trafficking suspect.

Acting on intelligence gathered from the community, Kimberley SAPS searched a shack in the Transit Camp shantytown. Members found 27 bags of dagga in the shack and arrested a 38-year-old man.

“On Thursday, 14 May 2020, at about 10:40, the SAPS members followed up on information regarding dagga sales in Transit Camp.

“Police searched the shack and found 27 bags of dagga hidden behind the bed. The dagga weighs 105 kg and has an approximate street value of R525 000. The suspect was arrested for dealing in dagga and is expected to appear in the Galeshewe Magistrate’s Court soon.

The Provincial Commissioner for the Northern Cape, Lieutenant General Risimati Peter Shivuri commended the SAPS Kimberley members for a job well done and thanked the community for their assistance in this case.

“The Northern Cape will continue to intensify the COVID-19 operations, in order to squeeze the space for criminals to operate,” General Shivuri said on Thursday.