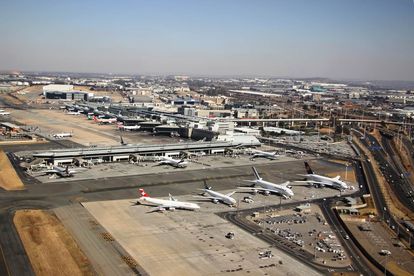 Acting on information gathered in a joint intelligence operation SAPS swooped into a cargo warehouse at the airport. They discovered a crate full of wine with a suspicious weight and upon further investigation found a hidden compartment. Packages full of a brown powder, suspected to be heroin were found in the compartment and sent for testing.

The packages, bound for Amsterdam, have an estimated street value of R1.5million, uncut.

In a release issued to the press on Thursday Lieutenant Colonel Katlego Mogale said: “Great collaboration between the stakeholders at the O. R. Tambo International Airport (ORTIA) has once again paid off.

“There has been breakthroughs made as a result of the on-going integrated multi-disciplinary narcotics team’s proactive fight against crime at the ORTIA, especially the proliferation of drugs coming into and through the port. The integrated multi-disciplinary narcotics team intercepted suspected drugs worth an estimated R1.5 million yesterday at the airport.

“During a joint intelligence-driven operation, the members from ORTIA Narcotic task team followed up drug related information at a cargo warehouse at the airport.

“Allegedly, a wooden crate which had been declared as wine, destined for Amsterdam was identified. Upon arrival at cargo, members identified the cargo as containing boxes with sealed bottles of wine inside the crate.

“The said crate was put through an x-ray machine and physical investigation. The crate upon being weighed, had a little extra weight that there should be. Members became suspicious and proceeded to dismantle the crate.

“During the dismantling of the crate, a hidden compartment was discovered at the base. Inside the hidden compartment, a number of packages containing brown powder suspected to be heroin were found. The packages will be sent to the Forensic Science laboratories for a conclusive confirmation.

“The law enforcement agencies at ORTIA have no space for drug peddlers in this country. These substances and their precursors are ravaging our communities and such interceptions bear testimony to the commitment of this team to rid this country of drugs and drug dealers.

“No one was arrested as yet but the investigations continue into the source of the drugs and it cannot be ruled out that suspect/s once caught can be linked to other similar cases.”

The community is encouraged call the Crime Stop number 0860010111 with information that can assist in combating of crime. Callers may remain anonymous and all information will be treated with strictest confidence.