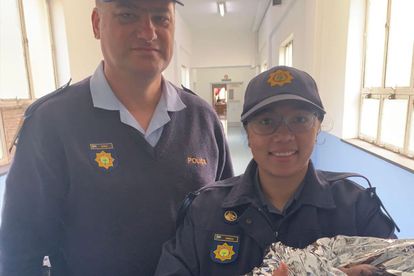 These SAPS officers went above and beyond when they assisted a mother who had given birth under a tree. Photo: South African Police Service / Facebook

These SAPS officers went above and beyond when they assisted a mother who had given birth under a tree. Photo: South African Police Service / Facebook

A South African Police Service (SAPS) member in the Eastern Cape came to the rescue of a pregnant woman who gave birth under a bridge.

W/O Maree was flagged down while patrolling

According to Colonel Priscilla Naidu, the SAPS Mount Road member and a K9 unit member went out in the cold and rain in Gqeberha to assist the mother on Sunday, 14 August.

Warrant Officer Werner Maree and his colleague were patrolling in North End when a person flagged them down. The person rambled about something and pointed towards the bridge before the members rushed in that direction.

“The members rushed towards that direction expecting to attend to a crime scene however when they stopped their vehicle and enquired from another person, the police officers were informed that a woman needed assistance as she was giving birth,”

The officers found the woman covered in a blanket on the corners of Green and Adcock streets. She had already given birth but the baby’s umbilical cord was still attached. Officers also stated that there was a wound around the baby’s neck.

An ambulance was requested and Constable Shaneez Daniels from the K9 unit made her way over to assist. The officers were able to carefully cut the umbilical cord of the newborn baby boy. He was covered in a blanket and kept warm in the police vehicle as they waited for an ambulance.

“The child who weighs 2,6kg’s was safely taken to hospital by ambulance and is reported to be in a healthy condition. W/O Maree later felt very jubilant for playing such an active role of bringing forth a life into this world as he too, was celebrating his birthday today,” said Naidu.

Worcester police help deliver a baby under a tree

In related news, it was previously reported that Worcester Police officers went beyond the call of duty when they helped deliver a baby under a tree. The healthy baby boy was delivered in broad daylight under a tree in Aan de Doorns Road on Tuesday, 15 March 2022 at around 14:50.

Police spokesperson, Captain Frederick van Wyk said the local sector commander Warrant Officer Anneline Fielies was busy with patrols when she was approached by a male, asking her to assist his girlfriend suffering from labour pains.

The member called the ambulance service for assistance, whilst she cordoned off the area with blankets. Western Cape Provincial Commissioner, Lieutenant General Thembisile Patekile lauded the members for going the extra mile. Read the full story here.