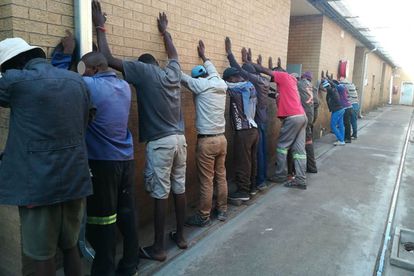 In Gauteng, the South African Police Service (SAPS) struck a blow against illegal mining on Thursday making over 60 arrests across the province.

The arrests also helped lead the SAPS to the suspected kingpins of an illegal mining syndicate.

After police nabbed the illegal miners in Roodepoort, two men came forward and attempted to bribe the SAPS to release the zama-zamas.

The men are believed to have supplied the miners with equipment which police confiscated.

“Police have arrested two suspects who are believed to be behind the illegal mining and supporting illegal miners with equipment in Gauteng,” said a statement on the South African Police Service Facebook page.

“These suspects allegedly offered the police thousands of rands for the release of suspects arrested for illegal mining in Roodepoort yesterday.”

The miners and their suspected employers are expected to appear at Roodepoort Magistrate’s Court tomorrow facing charges of bribery among other crimes.

Gauteng Provincial Commissioner, General Elias Mawela, commended the SAPS officers for the arrest of the duo.

“We have been hunting for the people that are leading this scourge of illegal mining in our province. I believe the arrests of these suspects will help us trace others who are still at large ” said Provincial Commissioner.

Zama-zamas not the only ones locked up

The SAPS Operation O Kae Molao was conducted in various areas of Gauteng yesterday. Officers also confiscated pieces of equipment used for illegal mining and liquor consumed on the sites.

As part of the operation, the SAPS also pursued suspects wanted for other crimes, making over 500 arrests in the decisive action.

“Furthermore, as part of Operation O Kae Molao, police detectives went full force to trace the suspects that have been on the run after committing serious and violent crimes in the province,” the commissioner added.

The arrested suspects will appear at different magistrates courts from Friday 17 April 2020.