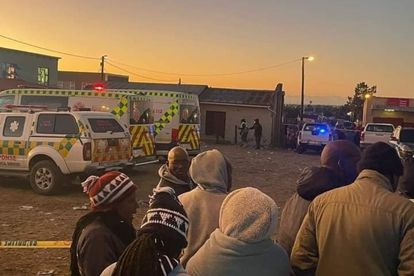 Police are far from concluding their investigation into the deaths of 21 teeangers at Enyobeni Tavern. PHOTO: Facebook

Police are far from concluding their investigation into the deaths of 21 teeangers at Enyobeni Tavern. PHOTO: Facebook

It’s been seven days since the tragic death of 21 teenagers at Enyobeni Tavern but police were far from completing their investigations.

The SABC reported at the weekend that police had concluded their on-site investigations into the mysterious deaths of scores of children.

The teens bodies were strewn throughout the tavern in Scenery Park, East London, with some found dead on tables and in their seats.

ALSO READ: Mom of Enyobeni victim speaks out: ‘We did not send our kids to the tavern’

But police spokesperson Brigadier Tembinkosi Kinana said the investigations were still on.

Speculations of the deaths of the teenagers were ongoing, with some stating the children could have been killed by carbon monoxide poisoning.

The police have however rubbished such claims, as autopsies of the bodies would determine the cause of deaths.

TEENS TO BE BURIED THIS WEEK

A mass funeral is expected to take place on Wednesday, with the assistance of the Eastern Cape provincial government and funeral parlour AVBOB.

Families received food parcels and vouchers last week to assist with the immediate needs and costs. Along with the broader community, they continue to receive psycho-social support from the province and its partners.

The young teenagers were aged between 13 and 17 years and died in the early hours of last Sunday morning during a pens-down party.

Some of the teenagers claim they heard about the party on the tavern’s Facebook page. The post enticed the teenagers by offering free food and drinks.

But it was established by the Buffalo City Metropolitan Municipality that the tavern is illegally built.

Meanwhile, the tavern is found to be established illegally by the Buffalo City Metropolitan Municipality.

According to the municipality, it did not receive any land-use application and no departure was granted for the operation of a tavern on the site.

The outcome of the investigation will determine whether the municipality will go ahead and demolish the tavern.