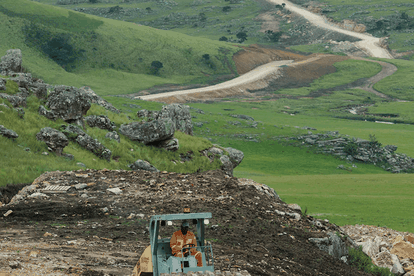 The N2WCR will include two mega bridge structures, with the Mtentu River Bridge, once completed, being the highest in Africa. Image: SANRAL

The N2WCR will include two mega bridge structures, with the Mtentu River Bridge, once completed, being the highest in Africa. Image: SANRAL

The N2 Wild Coast Road (N2WCR) construction project has been flagged as one of SANRAL’s most ambitious undertakings yet, stretching 410km from East London to the Eastern Cape’s boundary with KwaZulu-Natal.

It is scheduled for completion in 2024 and expected to boost the development of some of South Africa’s most disadvantaged municipal areas, and improve the lives of some of the country’s most neglected communities.

“The N2 Wild Coast Road Project holds significant socioeconomic benefits for local communities, including an estimated 8,000 direct jobs envisaged for construction work, whilst operational work is anticipated to create 900 direct jobs in addition to the 16-20 000 indirect jobs that will flow from the project.”

Government has identified the eastern half of the Eastern Cape as an area crying out for economic growth and work opportunities, with its people suffering deprivation while living in a resource-rich area.

The Pondoland stretch of the Wild Coast with its deep gorges, rugged coastline, thundering waterfalls, scenic and secluded beaches, along with its unique flora and local culture, will open huge potential for conventional, adventure, and eco-tourism. Inland, the high rainfall and fertile ground provides great potential for agricultural development.

SANRAL says the N2, as it is now, turns inland from Mthatha, and due to the many deep gorges and poor road infrastructure, there is a vast, inaccessible land corridor along the coast between Port St. John and Port Edward.

The new N2, South Africa’s road agency says, will open up this coastal strip while also providing a safer, flatter and faster link between Durban and the industrial centres of East London and Port Elizabeth. It will benefit businesses operating along the entire east coast as well as stimulating development of the Wild Coast.

In addition, the N2 east of Mthatha is extremely busy and congested, with high road fatalities.

Traffic volumes, bad driver behaviour, the mountainous terrain, mist, pedestrians, and animals straying onto the road are contributing to the high road death rate, and the frustrations, says SANRAL.

Poor access also limits the work of the emergency services.

Mobility is extremely challenging for residents living in the rural villages along the N2WCR. It is one of South Africa’s most scenic areas, but also one of it’s most poorest.

Breadwinners and learners must commute long distances for work and school, as well as to access other services which require travel, spending hours in buses and taxis. Migrant workers seldom visit home.

The new highway, supported by the road access management system linking this high order road with lower order roads, will be an important first step to safer, more convenient travel and a better quality of life, says SANRAL.

“This will mean a travel time saving of between one-and-a-half to three-hours for road-users once it is completed saving the economy R1.5 billion annually.”

The upgrading of lower order roads in the villages near the new route and linking these roads to the new N2 has also translated into R120m worth of opportunities for community development projects by local small, medium and micro enterprises (SMMEs).

The highest bridge in Africa

Two mega-bridge structures on the Msikaba and Mtentu Rivers are part of the N2 Wild Coast Project.

The Mtentu Bridge, once completed, will open as the highest bridge ever built in Africa with a deck height of approximately 223 meters.

The massive central beam span of 260 meters will also be a record for the African continent among beam bridges and the 141 meter pier 9 will also be the tallest on the continent, according to highestbridges.com.

The entire structure will have a deck 22.8 meters wide with walkways on both edges.

The nearby cable stayed Msikaba Bridge will not be as high as Mtentu Bridge, but the main span of 580 meters will be the second longest on the African continent, with the 680 meter span Maputo-Catembe Bridge in Mozambique topping the list in that department.

A major upgrade of the N2 between East London and Mthatha and the R61 between Mthatha and Ndwalane near Port St Johns. The section-by-section improvement of these roads has been underway since 2011.

The construction of 96km of so-called “greenfields” – or brand new – highway and 17km of upgrading between Ndwalane and the Mtamvuna River, near Port Edward, via Lusikisiki.