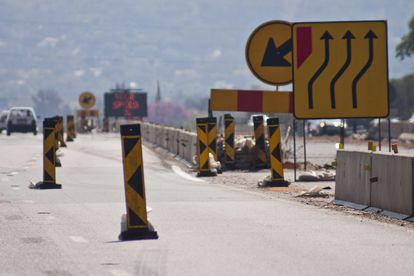 The South African National Road Agency (SANRAL) has cautioned road users to expect road closures on the N1 South bound between N1/R21 (Flying Saucer interchange) and Botha Avenue in Centurion to allow for rehabilitation work on the sinkhole.

In January, heavy rains in Gauteng left a massive sinkhole along the N1 in Centurion, forcing SANRAL to call on geotechnical experts to assist with assessment.

SANRAL TO CLOSE N1 FOR ROADWORKS

Going forward the lane closures on the N1 section 21 at Km 22.1 Southbound will be implemented as follows:

SANRAL’s Northern Regional Manager, Progress Hlahla said the closure is required to allow for road marking in the lanes of the southbound carriageway.

The reconfiguration of the lanes is required to remark the road which has since been increased from three lanes to four to assist in alleviating traffic congestion.

“During this period only two lanes will be open. The duration of the closure will be kept as short as possible. Motorists are requested to plan their trips, accordingly, consider alternative routes and use caution when making use of the roads,” said Hlahla.

WHY ARE THERE SO MANY SINKHOLES IN CENTURION?

Over the years, Centurion has been hit by sinkholes which have formed either on major roads or outside people’s homes. It has even been nicknamed the ‘Sinkhole Alley’.

As previously reported, the presence of dolomite, which is most likely activated by heavy rains, is the reason behind sinkholes in Centurion.

According to the Council for Geoscience, in the past five years alone, roughly 200 sinkholes were recorded across Gauteng.