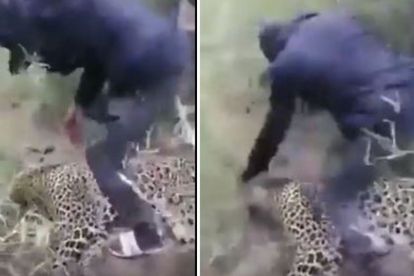 SANParks confirmed on Friday that a worker was suspended after the video of a man slapping a leopard in the Kruger National Park shortly after it had been euthanised.

SANPARKS SAID THIS BEHAVIOUR IS IN CONTRARY

“SANParks again strongly condemns the behaviour depicted in the images captured on video after a leopard had been euthanized in the Kruger National Park, and was then struck by onlookers.

“Such actions are contrary to the ethos of the organisation whose primary goal is to conserve biodiversity and act as the custodian of our wildlife.”

“Statements have been taken from Rangers and other employees present. A small number of statements are still outstanding and will be collected.”

Phaahla said rangers euthanized a leopard on Sunday, 17 July 2022 and the leopard was being retrieved to be taken for a post-mortem.

He said SANParks has taken steps to positively identify all persons in the video.

Four of the nine implicated persons are confirmed SANParks employees and three are Rangers.

FOUR OF THE NINE PEOPLE IMPLICATED ARE SANPARKS EMPLOYEES

“A further three individuals are employed by concessions who operate in the Park and the last one is employed as an Environmental Monitor.”

Phaahla said the man who was filmed striking the euthanised leopard was visiting the Park and is not a SANParks employee.

“SANParks is aware of his identity and is taking legal advice on sanctions to be imposed on him.

“The State Vet’s post-mortem report confirms that the cause of death was from bullet wounds and not as a result of any other actions.”

Phaahla furthermore said on the basis of the evidence received, one employee has been suspended pending disciplinary action, and line management is finalising their approach with respect to other employees who may have transgressed SANParks’ policies and code of conduct.

“SANParks once again states that the actions of these individuals run counter to conservation management and the ethos of the organisation.”