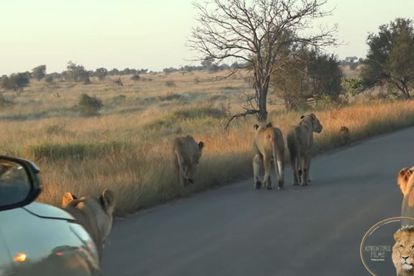 A video circulating on social media of a SANPark official almost driving over lions and cubs in the Kruger National park has the public fuming.

In the video shared by Africa Adventures on YouTube, the official can be seen trying to avoid the convoy of tourists during a lion sighting and driving towards the lions, almost running them over.

The incident took place on Sunday 29 May 2022 around 06:46 according to Africa Adventures.

“The lion pride was walking down the road (H1-3 between the N’wanetsi Bridge and the H6 turn off) followed by their normal entourage of tourists when a hasty ‘Park Official?’ came weaving through the traffic,”

according to Africa Adventures.

SANParks has since strongly condemned the behaviour of the official for driving recklessly at a lion sighting.

“The behaviour is not only unacceptable but also not in line with SANParks’ protocols at sightings in the park. This kind of conduct by employees or visitors is not encouraged,”

SANParks said in a statement.

Disciplinary action will be taken against the official following an internal investigation.

Moreover, SANParks has encouraged those who witnessed the unfortunate incident to contact the Communication and Marketing, to give a statement.

SANParks Management further thanked members of the public for bringing this matter to our attention.

ALSO READ: Veld fires may be to blame for power outages – City Power