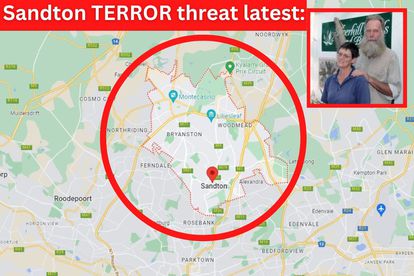 In the latest update on the Sandton TERROR threat, it has been revealed that the main threat is from Daesh extremists linked to Daesh (formerly referred to as ISIL or ISIS).

This comes after the brutal kidnapping and murders of two South African-British nationals in 2018.

Botanists Rod Saunders, 74, and his wife Rachel, 63, were brutally murdered in February 2018, but the trial for their brutal murders only started in the Durban High Court earlier this month.

These brutal murders shook the world, and the gruesome details are only now being disclosed as the trial started during the first few days of the trial.

THREATS COME SHORTLY AFTER THE TRIAL OF BRIT’S COUPLE

The Brit couple was beaten to death and thrown into a crocodile-infested river.

Their badly decomposed bodies had been eaten when they were pulled out of the water.

According to the latest alert issued by the U.K. Government, the main threat is from extremists linked to Daesh (formerly referred to as ISIL or ISIS).

THE BRIT COUPLE WAS BRUTALLY KIDNAPPED AND MURDERED

The jihadist group which controls large swathes of territory in Syria and Iraq is sometimes and formerly referred to as ISIL or ISIS. But lately, more known as Daesh.

The term “Daesh” (or Da’ish) has also gained currency, both in the Middle East and further afield, and has been used as a way of challenging the legitimacy of the group due to the negative connotations of the word.

The U.K. Government furthermore warned attacks could be indiscriminate, including in places visited by foreigners, such as shopping areas in major cities.

“There is also a threat from individuals who may have been inspired by terrorist groups, including Daesh, to carry out so-called ‘lone actor’ attacks targeting public places, including where foreigners may gather.”

It also said South African authorities have successfully disrupted several planned attacks and made a number of arrests related to terrorism offences, including alleged plots to attack Jewish targets and western diplomatic missions.

ALSO READ: ‘Stay away from Sandton’: UK follows US to issue terror warning

“South African authorities have also been effective against right-wing extremists.

“There’s a heightened threat of terrorist attack globally against U.K. interests and British nationals from groups or individuals motivated by the conflict in Iraq and Syria.”

ALSO READ: ‘We will march’: Joburg Pride to go ahead despite terror threat