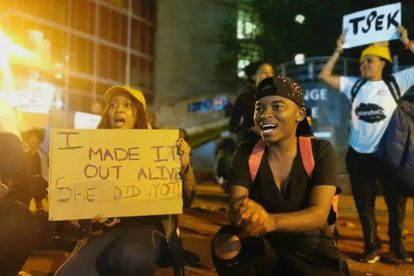 Women began gathering for the Sandton Shutdown in the wee hours on Friday ahead of the planned #SandtonShutdown protest against Gender-Based Violence (GBV).

The protest which comes one day after national crime stats indicated that violent crimes and murder had significantly worsened.

On Thursday the National Union of Metalworkers of South Africa (NUMSA) issued a statement in support of the protest, which is a call to action from all civil society groups to participate in a massive sit-in in Sandton City in order to highlight the scourge of GBV.

Sandton Shutdown: Thousands of demonstrators expected at the JSE

I wish the police came out in their numbers like they have in Sandton today when a woman reports a crime #SandtonShutdown pic.twitter.com/T2tjLhR5o9

As many as 10,000 people are expected to participate in the march that will see the protesters hand over a memorandum at the JSE.

NUMSA said the goal is to shut down normal business operations, and to disrupt economic activity in order to highlight these issues which are destroying our society.

“Attacks against women and children are worsening in South Africa. The murder rate has gone up, including the rate of sexual offences against children,” said NUMSA in a statement issued by its second deputy president, Ruth Ntlokotse.

“It is unsurprising therefore that the war against women has intensified. On average one woman is killed every three hours in South Africa, and in most cases the perpetrator is a man who is known to the victim.”

What time should we expect you at the JSE? Do you have friends and family who are with us on the ground today? #SandtonShutdown #PayThePatriarchyTax #IWontBeNext pic.twitter.com/6sofXB4VKj

The union said extreme levels of violence in our society, and in particular against women and children are a sign of the deepening of the Extreme poverty and inequality are by-products of the Capitalist system and it is responsible for worsening conditions in our society today.

“Today women, and in particular, African working class women remain the most abused in our society. They are the lowest paid, and are also often victims of violence in their homes,” said NUMSA.

“We support this protest and encourage all our members, as well as other working class formations to participate. Only a united working class, working to destroy the greedy, destructive capitalist system, can save us from patriarchy, and all the social ills associated with Capitalism.

“Members of the working class must unite to create a new, genuinely equal Socialist South Africa.”

Johannesburg Metropolitan Police Department has warned that some roads in Sandton will be affected by the protest march.