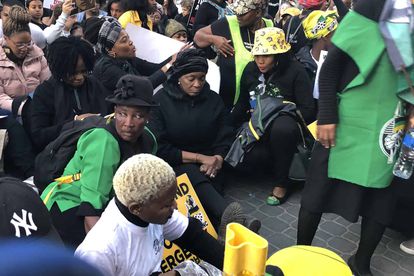 The Sandton shutdown commenced without delay in the wee hours of Friday morning outside the Johannesburg Stock Exchange (JSE), that’s situated in Sandown, on Gwen Lane.

Things at the Sandton shutdown have, for the most part, remain cordial. Scores of protesters have picketed outside the JSE, chanting struggle songs and drawing attention to their placards which hold the key message to the entire occasion.

While law enforcement agencies have gathered around the perimeter to ensure that no unlawful unrest breaks out, there have been no indications that things will turn violent.

There was a little scuffle between protestors and members of the ANC Women’s League, however. Anti-gender-based violence (GBV) demonstrators were offended by the members who joined the occasion adorned in party regalia.

Why are protesters picketing outside JSE?

The hundreds of protesters have picketed outside the JSE to make a call to corporate South Africa to not remain silent on the issue of gender-based violence.

Therefore, a memorandum has been drawn up and will be submitted to the JSE which demands 2% on all profits made to be channelled into the fight against GBV.

A JSE representative is expected to appear outside the building to accept the memorandum between 10:00 and 11:00.

Why was Bathabile Dlamini booted from the protests?

Things got even louder when a faction of the protesters realised that former Minister of Women in the Presidency, Bathabile Dlamini had joined the Sandton shutdown.

Virginia Magwaza – Gender Activist asking why ANC Womens League is present at the march when they are the ones that got us here in the first place. #SandtonShutdown #AmINext #PayPatriarchyTax pic.twitter.com/rMXU8OUcnA

As she tried to speak to members of the media, in support of the protests, her voice was drowned out by people chanting about Khwezi, the woman — who’s real name is Fezekile Khuzwayo — that was allegedly sexually assaulted by former president Jacob Zuma.

I side & Stan with the rapists here,

If I were to march, I've matched for you, not use your ordeal as an excuse & opportunity to drag JZ!! pic.twitter.com/FQheWlbyXt

According to reports from people on the ground, it is believed that Dlamini, who could not deal with the mounting pressure she faced, has since left the protest.

Ao poor Ma'm Bathabile Dlamini, they chased her like a novice in what she thought would be her moment to reinvent herself early this morning in Sandton during #ShutDownSandton. Women shouted 'Khwezi, Khwezi, Khwezi'. She was whisked away to avoid further embarassment??????

As the protest action builds up on Friday morning, traffic has maintained a steady flow. According to TrafficSA, traffic in Sandton has been flowing easily in and around the central parts of the city.

JHB – #Sandton Yes you can: Traffic is very light in the central Sandton area #SandtonShutdown https://t.co/ByHcc0AhPl